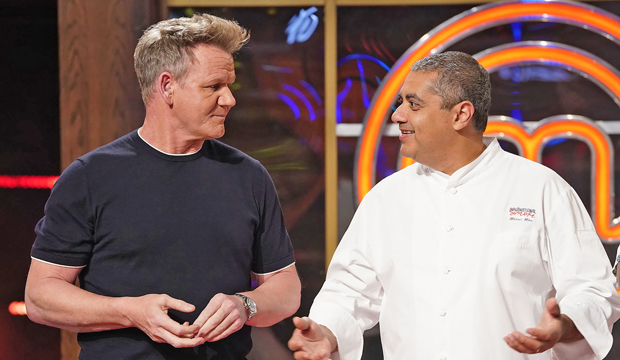 Heading into the sixth episode of “MasterChef: Legends,” host Gordon Ramsay and judges Joe Bastianich and Aaron Sanchez had already eliminated two home cooks: Elyce Wooten and Annai Gonzalez. That left the Top 13 still in the running to join the show’s iconic winners list. This week the judges welcomed celebrity chef Michael Mina to the panel, a restaurateur who oversees more than 40 restaurants around the globe. Michael tasked the remaining chef-testants with competing in a fun meat roulette challenge. So how’d it all play out on Wednesday night?

Below, read our minute-by-minute “MasterChef” recap of Season 11, Episode 6, titled “Legends: Michael Mina – Meat Roulette,” to find out what happened Wednesday, July 7 at 8:00 p.m. ET/PT. Then be sure to sound off in the comments section about your favorite aspiring chefs on Fox’s reality TV show and who you think has what it takes to join the winners list.

8:00 p.m. — “Previously on ‘MasterChef!” In the fifth episode, cake queen Sherry Yard joined the judging panel for a special dessert challenge. She helped the judges pick the four best dishes (Tay Westberry, Lexy Rogers, Anne Hicks and Michael Newman) as well as the three worst (Annai, Abe Konick and Matt Gagnon). Tai prevailed thanks to his pineapple upside-down cake with cherry compote and lemon zest whipped cream. Annai was sent home because of her avocado no-bake cheesecake with dragon fruit cream and mango sauce. Who will be eliminated tonight?

8:08 p.m. — The Top 13 home cooks are back in the kitchen for the season’s first mystery box challenge. Before they begin, Gordon delivers some unsettling news that Mary Jayne Buckingham has fallen ill and is no longer able to compete. The good news is that the 59-year old Texas nursing assistant will be just fine, but now only 12 competitors remain. Next, this week’s legend Michael Mina is introduced as a guest judge. The king of surf & turf has over 40 restaurants and credits his Middle Eastern/Egyptian heritage as his main culinary influence. In tonight’s challenge, each of the home cooks will be tasked with cooking a beef dish, but they won’t know which cut they’re cooking until they lift their mystery box. For some extra inspiration, both Gordon and Michael give a cooking demo for the aspiring chefs. Now, each contestant has one hour to cook up a restaurant-quality dish using whatever cut of beef is in their mystery box. Let’s go!

8:10 p.m. — Everyone lifts their mystery boxes to see what cut of beef they’ll be working with tonight. Anne is not happy to see beef cheek (which she’s never cooked or eaten before) under her box and Abe is pretty disheartened to see sweetbread under his. Aaron announces that the winner of tonight’s challenge will win dinner for two at Michael’s restaurant in San Francisco. The home cook that cannot run with the bulls will be eliminated.

8:25 p.m. — While speaking with Joe, Michael says the short ribs are the most difficult to cook based on the limited time of tonight’s challenge. That cut belongs to Suu Khin, who has been a front-runner this season. She’s planning to use the pressure cooker to ensure tenderness. Meanwhile, Anne is terrified she will be eliminated for her beef cheek, which typically takes six hours to cook. Matt’s filet is probably the most familiar cut, but he’s nervous that expectations will be exceptionally high for him because of that. Hoping to mask the flavors of his sweetbread, Abe is taking advantage of the deep fryer.

8:35 p.m. — With less than 20 minutes remaining in the challenge, Matt realizes his filets are overcooked and he has to start over. Anne continues to freak out as her beef cheek pressure cooks and she must wait until the last minute to cook up a sauce from those juices. Meanwhile, Joseph Manglicmot seems to be thriving and he’s excited to prove he can cook more than fish. Time expires and some home cooks look more optimistic than others. Matt thinks both of his filets are cooked poorly and Lexy seems confident she could make the top three tonight after cooking New York strip for the first time.

8:45 p.m. — The judges walk around the kitchen to observe and taste everyone’s dishes. After a brief huddle they decide which three home cooks created the best and worst beef dishes of the night. The first home cook to be highlighted is Abe with his deep fried sweetbread with butternut squash puree and coleslaw. Gordon says it is definitely restaurant quality and Michael likes the acidity. Aaron says the one thing that doesn’t fit in the dish is the raisins. Another top dish belongs to Joseph with his shiso-wrapped flank steak with pickled radishes, noodles and salt, pepper & lime sauce. Gordon calls Joseph’s dish “elegant” and Joe compliments the brightness and cleanliness. The final dish in the top three belongs to Kelsey with her seared skirt steak with salsa roja, elote corn and avocado crema. Gordon says Kelsey’s food screams “eat me!” and Aaron compliments the seasoning. After a minute of deliberation, the judges decide the winner of tonight’s challenge is Abe! All three of tonight’s top cooks head up to the balcony and are safe from elimination.

8:55 p.m. — Now it’s time to see who failed this mystery box challenge. The first home cook in jeopardy of going home is Anne with her braised beef cheek with creamy polenta and roasted root vegetables. Gordon says the dish appears “lackluster” but Michael compliments her sauce. Joe says Anne is a great example of someone who does not know how to braise. Next in the hot seat is Lexy with her New York strip steak with roasted potatoes, sautéed mushrooms & onions and cabernet jam. Joe says the steak is slightly overcooked and white potatoes make him angry. Aaron loves the mushrooms but thinks Lexy’s potatoes are undercooked. Michael liked the flavors, but it’s dry and not aesthetically pleasing. Last up for possible elimination is Matt with his filet mignon with porcini vermouth pan sauce, Brussels sprouts and garlic mashed potatoes. Gordon tells Matt there is a big difference between searing and scorching. Michael says Matt didn’t hit any of the components he was looking for. Gordon at least likes Matt’s seasoning.

8:59 p.m. — After one final deliberation, the judges must decide if Anne, Lexy or Matt will be leaving the competition tonight. The dish lacking the finesse it takes to remain in this competition belongs to Matt. The construction worker from Connecticut heads home disappointed in himself, but he will continue to work on his skills at home.