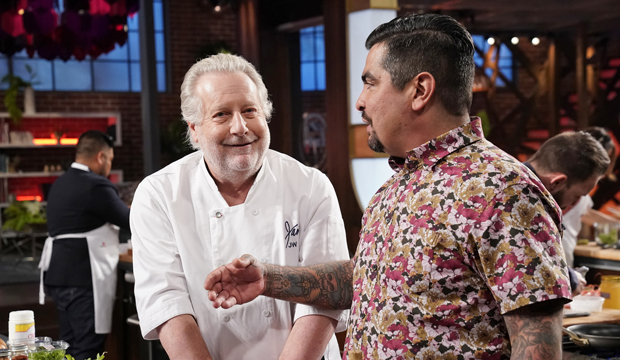 And then there were 10. This week’s episode of “MasterChef: Legends” introduced a “California Mystery Box” challenge for the chef-testants still in the competition: Abe Konick, Alejandro Valdivia, Anne Hicks, Autumn Moretti, Joseph Manglicmot, Kelsey Murphy, Lexy Rogers, Michael Newman, Suu Khin and Tay Westberry. Joining host Gordon Ramsay and judges Joe Bastianich and Aaron Sanchez this week was Jonathan Waxman, who tasked the players with creating a dish using five Cali ingredients. So how’d it all play out on Wednesday night?

Below, read our minute-by-minute “MasterChef” recap of Season 11, Episode 8, titled “Legends: Jonathan Waxman – California Mystery Box,” to find out what happened Wednesday, July 21 at 8:00 p.m. ET/PT. Then be sure to sound off in the comments section about your favorite aspiring chefs on Fox’s reality TV show and who you think has what it takes to join the winners list.

8:00 p.m. — “Previously on ‘MasterChef!” In the seventh episode, Legend Nancy Silverton joined the judging panel for a special pasta challenge. The four best chefs were Autumn (who won the challenge), Anne, Kelsey and Lexy. The three bottom chefs were Miles Gateff (who was eliminated), Alejandro and Michael. At the end of that episode, only 10 home cooks remained on the show. Who will be going home tonight?

8:07 p.m. — The Top 10 home cooks enter the MasterChef kitchen excited for their next challenge. Gordon has them lift the mystery boxes placed atop their stations to reveal some of the best ingredients California has to offer: Santa Barbara prawns, sea urchin, wasabi, avocado and grapefruit. These ingredients aren’t just top quality, they’re an homage to tonight’s legendary guest judge, Jonathan Waxman. He tells the aspiring chefs to “get in touch with your passion” and “let the ingredients guide you.” Tonight the home cooks will cook a dish which must use all five California ingredients given to them. They have one hour and the winner will receive a dinner for four at Chef Waxman’s New York City restaurant, Barbuto. Let’s go!

8:10 p.m. — The judges discuss how prawns can be a daunting food source for these home cooks. It is delicate and overcooks quickly. Gordon says he would make sea urchin butter with these ingredients and then brush the grilled prawns with that butter. That seems somewhat similar to what Tay is thinking, so look out for Tay to have a good night. Suu also seems pretty comfortable with prawns, stating that she grew up eating them. Meanwhile, Alejandro looks like he’s riding the struggle bus as he “butchers the prawns” and reveals that he is allergic to shellfish.

8:20 p.m. — The judges circle the kitchen and give the home cooks a bit of advice. Michael’s dish appears to be getting overcomplicated so Chef Waxman instructs him to simplify things. Joe gets an eye-popping taste of spice at Tay’s station, but the Nebraska home cook says he is excited for the judges to try the finished product. Abe is keeping things very simple with his dish, so Alejandro reminds him that everything will have to be executed perfectly. Autumn is not comfortable with the ingredients, but she knows how to make a New England clam chowder, so she’s just swapping clams for prawns and hoping for the best. Meanwhile, Alejandro seems impressed that Lexy plans to go a Mexican route with a deconstructed tostada. Joseph is in hot water with Gordon when he cooks the prawns with 35 minutes left on the clock. Way too early! If he can’t round up a few spare prawns from his competitors, Joe basically guarantees Joseph will land in the bottom three.

8:30 p.m. — Joseph lucks out and gets a few spare prawns from Anne and Lexy. He’s completely frazzled at this point and the judges are watching him like a hawk. With five minutes remaining, Chef Waxman tells the other judges he thinks Suu’s dish looks the most interesting so far. The surprise of the night is Autumn, who put avocado in her chowder! Will it taste okay? Time expires and it’s time to find out who sank and who swam in this challenge.

8:45 p.m. — After time expires, Tay panics as he realizes he left his Uni butter in the refrigerator. Forgetting a required ingredient is a massive mistake. The judges take a final stroll around the kitchen to spot check the best and worst dishes of the night. The first highlighted dish of the night is Suu’s grilled spot prawns with Uni butter and avocados in grapefruit & wasabi dressing. Chef Waxman says Suu “raised the bar” with her presentation and “the respect for the ingredients really shows.” Next, Abe is shocked to find out he’s in the top three with his broiled prawns with Uni butter, avocado crema and grapefruit & wasabi salsa. Gordon compliments Abe’s palate and Joe calls it a “great plate.” The final dish in the top three is Autumn with her New England-style chowder with citrus pan-seared spot prawns and Uni butter toast. The judges call her risk of adding unconventional ingredients to a chowder “inventive” and Joe says she “nailed it!” After a brief deliberation, the judges decide the winner this California challenge is Suu!

8:55 p.m. — Now for the bad news. The first chef in the bottom three is Alejandro with his grilled spot prawns with ajillo sauce with avocado & tomato salad, wasabi grapefruit dressing and uni. Joe calls it the antitheses of Suu’s dish and “offensive.” The second home cook in the bottom is Tay, who forgot the Uni butter. His prawn tostada with cilantro grapefruit slaw and avocado wasabi crema isn’t complete, but the judges ask Tay to go grab his forgotten butter just to see what could have been. Gordon says Tay’s prawns are cooked “delicious” and the seasoning is “spot on,” but he’s screaming for more avocado crema. Chef Waxman says if Tay had “drenched it in the sauce” and slammed the Uni butter on top, he would have been on another planet. The final dish in the bottom three is Joseph with his prawn pasta with Uni cream, with avocado, grapefruit and Uni in grapefruit ponzu. The judges don’t understand how this dish evolved and Chef Waxman describes his feelings as “flummoxed.” Alejandro says Joseph completely missed the mark. Joe calls it a “dump bucket.”

8:59 p.m. — The judges deliberate and must make a decision on who will go home tonight. It was a difficult decision, but Gordon says the most underwhelming dish of the night is Joseph’s. However, tonight’s challenge was about using five ingredients. This is a competition and they must abide by the rules. For that reason, Tay has been eliminated. That’s really disappointing, but both Joseph and Alejandro have dodged a bullet. Tay bids farewell to his fellow contestants and learns a tough life lesson.