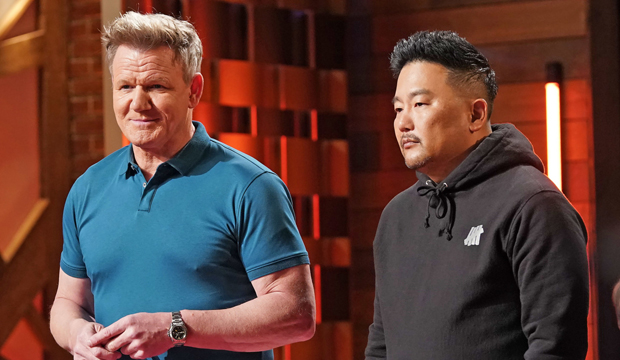 After a two-week break brought about by the Olympics, “MasterChef: Legends” finally returned to our TV screens on August 11. The Top 9 chef-testants still in the competition competed for immunity in front of host Gordon Ramsay, judges Joe Bastianich and Aaron Sanchez and special guest star Roy Choi. While nobody ended up going home, the fight to win immunity was still one to watch. How did it all play out? As a reminder, the remaining home cooks are: Abe Konick, Alejandro Valdivia, Anne Hicks, Autumn Moretti, Joseph Manglicmot, Kelsey Murphy, Lexy Rogers, Michael Newman and Suu Khin.

Below, read our minute-by-minute “MasterChef” recap of Season 11, Episode 9, titled “Roy Choi – Elevated Street Food,” to find out what happened Wednesday, August 11 at 8:00 p.m. ET/PT. Then be sure to sound off in the comments section about your favorite aspiring chefs on Fox’s reality TV show and who you think has what it takes to join the winners list.

8:00 p.m. — “Previously on ‘MasterChef’!” In the eighth episode, Legend Jonathan Waxman offered up a “California Mystery Box” challenge for the Top 10. The three best dishes belonged to Abe, Autumn and Suu (who won the challenge). The three bottom dishes were cooked by Alejandro, Joseph and Tay Westberry (who was eliminated due to a technicality). “It breaks my heart to send you home,” an emotional Gordon told Tay. How will tonight’s episode play out?

8:07 p.m. — The Top 9 home cooks enter the “MasterChef” kitchen and learn their legendary mentor this week is the savant of street food, Roy Choi. He tells the contestants about his humble beginnings in which he was fired from his chef job and started selling tacos in the street. In honor or Roy, the home cooks will take traditional street food and elevate it to a restaurant-quality dish. Gordon wants to see each cook’s “hometown heritage” on a plate and the winner will get dinner for two at Roy’s Las Vegas restaurant, Best Friend. They will also win immunity in the upcoming challenge, which means nobody is going home tonight.

8:10 p.m. — The cooks make a mad dash to the pantry to gather ingredients for their elevated street food. Autumn sticks to her Boston roots by whipping up a deconstructed lobster roll. She’s never cooked lobster before, but she wants to push herself tonight. Lexy is doing her take on a Philly cheesesteak even though she’s never been to Philadelphia. But who doesn’t know what a Philly cheesesteak is? Michael goes back to his roots (before becoming vegan) and plans to serve up fancy fish tacos. Chef Choi says street food comes down to the first bite. If you can’t capture someone with one bite, they’ll head down to the food truck next door. Kelsey tries to separate herself from the pack by making dessert, but the judges seem disappointed she won’t be accompanying her cake with ice cream. Meanwhile, Alejandro continues to overcomplicate things, explaining some seriously complex loaded potato dish to the judges. Gordon seems a little annoyed with him.

8:20 p.m. — Anne aspires to own her own food truck and plans to stand out in Michigan by cooking Asian-fusion cuisine. Joseph is another street food connoisseur and hopes to redeem himself after nearly being eliminated two weeks ago. With 30 minutes to go, Kelsey burns her caramel sauce and has to start over. She’s starting to get concerned she won’t get her whole composed dish on the plate.

8:35 p.m. — Abe is feeling confident with his Eastern European dish because he grew up in Romania for a number of years. Chef Choi seems particularly excited to try Abe’s dish because he’s never tasted whatever Abe cooking up. With time running out, it’s time for the home cooks to start plating! The judges seem most concerned about Lexy and Alejandro, but it’s all about the finished product! Will they pull it together?

8:45 p.m. — Kelsey is up first, presenting the judges her white chocolate & buttermilk cake with strawberry coulis, whipped cream and pistachio brittle. Gordon calls it “delicious” and says the texture is “spot on.” Roy isn’t thrilled with the proportions and Aaron loves the lightness. Next, Lexy serves up her New York strip “cheesesteak” with bell peppers, onions & mushrooms, cheese sauce and parmesan tuile. Before anyone takes a bite, Lexy tells the judges she’s disappointed with what she created. Gordon calls the steak “absolute, utter perfection.” The only letdown is the sauce, but Chef Choi tells Lexy she needs more confidence when selling this fantastic dish. It’s Anne’s turn now and she serves a shrimp “spring roll” with fried rice noodles and pickled cucumber. Joe describes it like “eating a Brillo pad” and says he wanted to immediately spit it out. Yikes! At least she cooked the shrimp “beautifully.”

8:50 p.m. — Alejandro brings forward his “loaded fries” with steak & eggs with hollandaise sauce and truffle slices. The steak is cooked beautifully and Gordon calls the dish “delicious” and “elevated.” This brings a huge sigh of relief to the home cook, whom the judges had been doubting all day. Next Autumn serves up a tarragon poached “lobster roll” with celery root puree, pearl onions and lemon zest croutons. Gordon says the lobster is a bit undercooked, but he loves the claw. Chef Choi says adding pepper would go a long way. Then Abe brings up his “Mici” with lamb, beef & pork with toasted brioche and coleslaw. The judges are delighted by Abe’s dish and Chef Choi thinks it’s “amazing.”

8:55 p.m. — The next dish belongs to Suu, who brings them New York strip “kabob” with pan seared vegetables and mint cucumber chutney. Aaron and Chef Choi both love the dish, but it could use a bit more marinade. Then Michael serves his “fish tacos” with lump crab hash and spicy slaw. Gordon notices a horrendous mistake when he finds out Michael didn’t take the skin off the fish before deep frying it. Other than that, the fish is cooked beautifully and full of flavor. Chef Choi doesn’t understand the crab incorporated in this dish, but he likes it overall. The last dish of the night is Joseph’s pork chop “banh mi” with pickled vegetables, fried onions and cilantro jalapeno aioli. The pork is “cooked beautifully” and the marinade is “spot on.” Chef Choi calls it a “restaurant dish” but asks for more sauce. Joe calls it “clean” and “precise.”

8:59 p.m. — The top three dishes belong to Kelsey, Joseph and Lexy. The winner of immunity and dinner for two at Chef Choi’s Vegas restaurant is Joseph. What a redemption after nearly being eliminated in the last episode! Next week the home cooks will be wearing their black aprons as things heat up in the kitchen. Joseph will get to relax on the balcony with an automatic pass into the Top 8.