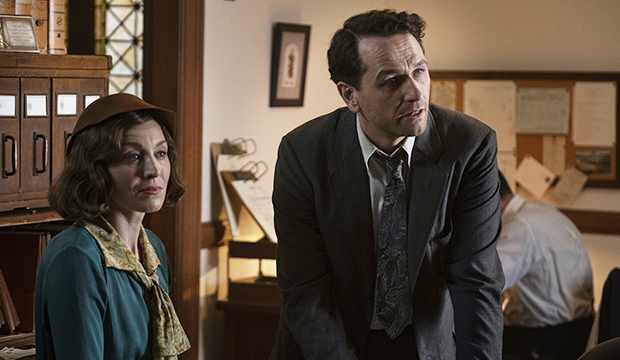 Three years after taking home the Best Drama Actor Emmy for “The Americans,” Matthew Rhys is back in the game with “Perry Mason.” The star wouldn’t be the first person to win an Emmy for playing Perry Mason — Raymond Burr snagged two statuettes for the OG series — but a victory for the HBO reboot would give Rhys some unique distinction in Emmy history: He would be the first person to win the category multiple times for playing different characters on different dramas.

Both of those qualifiers are important because there are some special cases here. James Spader is a three-time champ for two different dramas, but he played the same character, Alan Shore, on both “The Practice” and its spin-off “Boston Legal.” He won for “The Practice” in 2004 and immediately defended his crown the following year with “Boston Legal,” so it was obvious voters couldn’t get enough of his legal eagle (his third win came in 2007).

Then there’s another three-time winner, Robert Young, who prevailed for playing two different characters on two different shows, but one of those shows, “Father Knows Best,” was a sitcom. This comes down to how you want to classify his wins. Back in the early days of the Emmys, there weren’t genre-specific categories — they weren’t standardized until 1966 — so you had drama and comedy performances competing against one another under ever-changing category names. Young won for “Father Knows Best” in 1957 (when the category was known as Best Continuing Performance by an Actor) and 1958 (Best Continuing Performance by an Actor in a Leading Role in a Dramatic or Comedy Series… truly a mouthful). He nabbed his third trophy for an actual drama, “Marcus Welby, M.D.”, in 1970.

The other 10 actors who’ve won this category more than once have each done so for playing one character on one drama. That includes the likes of Burr, three-time winner James Gandolfini (“The Sopranos”), and four-time champs Bryan Cranston (“Breaking Bad”) and Dennis Franz (“NYPD Blue”).

Now a five-time nominee, Rhys hasn’t contended since his win for the final season of “The Americans.” Among the people he beat in 2018 was then-reigning champ Sterling K. Brown, who’s once again nominated this year for “This Is Us.” Billy Porter is the only other former champ in the lineup, but he too is up for the same show for which he won, “Pose.”

Currently in fifth place in the odds, ahead of just Brown, Rhys feels very much like a long shot. While he received great notices for his take on Perry, who starts out as a hard-luck private investigator before transforming into the defense attorney everyone knows, the show didn’t exactly make a huge splash. He’s also the only one of the six nominees whose show is not nominated for drama series. Josh O’Connor leads the way for series frontrunner “The Crown,” followed by Porter, who saw “Pose” return to the series lineup for its final season after getting dropped last year, in second, Rege-Jean Page (“Bridgerton”) in third and Jonathan Majors of the canceled “Lovecraft Country” in fourth. The last drama actor winner whose show was snubbed for the top honor was Jeff Daniels for “The Newsroom” in 2013, but that was also under the tape system.

Not great odds for Rhys, but even if he doesn’t pull off the win this year, he has at least one more shot with “Perry Mason” as it has been renewed for a second season. Not only that, but the four guys in front of him in the odds won’t be back for their respective shows for one reason or another.