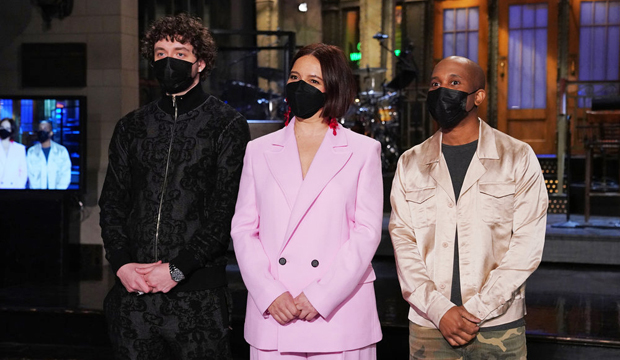 Maya Rudolph hosted “Saturday Night Live” on March 27 with musical guest Jack Harlow, the first live show for the NBC sketch series in a month. This was the “SNL” alum’s second time hosting, previously helming an episode in 2012. For her opening monologue, Rudolph began by discussing how the past year has been a real “kick in the clam,” but thankfully, there is light at the end of the tunnel.

Rudolph discussed her past as an “SNL” alum, working as a cast member from 2000-07. She noted that as an “elder,” she felt compelled to help bring the younger cast members under her wing. Freshmen cast members Andrew Dismukes, Lauren Holt and Punkie Johnson then joined Rudolph onstage where they were treated to some life lessons from her time on the show. After unceremoniously dismissing Dismukes for admitting he was only five years old when she joined “SNL,” Rudolph spoke to Holt and Johnson about working with cast members like Rachel Dratch and Jimmy Fallon.

Holt and Johnson became suspicious of Rudolph’s stories, especially her descriptions of Dratch as a freckled redhead and Fallon being the bad boy. As they observed, her memories sounded suspiciously like the plot of “The Breakfast Club.” She then sang the melody from “Don’t You Forget About Me” to bring it all home.

This was certainly not Rudolph’s first appearance on “SNL” this season. She has appeared in seven other episodes as Vice President Kamala Harris and a handful of other characters. The actress won an Emmy for Best Comedy Guest Actress last year for her portrayal of then VP candidate Harris. She is lending her voice to various projects in 2021, including the fifth season of “Big Mouth” and two animated films, “Luca” and “The Mitchells vs. the Machines.”