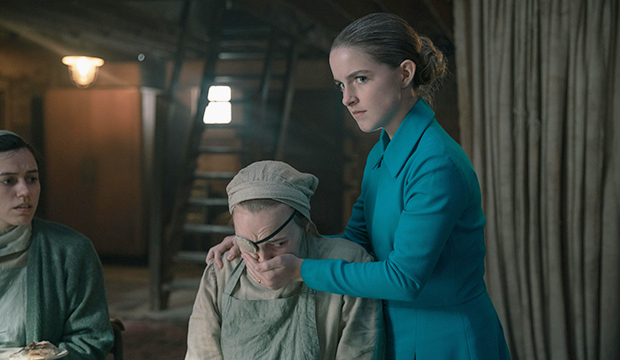 “The Handmaid’s Tale” had long been predicted to win another Emmy in Best Drama Guest Actress — it just might not go to the person everyone was initially expecting. Alexis Bledel led the odds during the nominations phase and in early winner odds, but the 2017 champ has now been knocked out from the top spot by her co-star Mckenna Grace.

Grace currently holds a narrow edge over Bledel at 71/20 to 18/5. Claire Foy (“The Crown”) is further back in third, followed by Sophie Okenedo (“Ratched”) and Phylicia Rashad (“This Is Us”). Grace was predicted to get a bid — she was in fourth place — so her nomination wasn’t a complete shocker, but what’s changed is the circumstances around her show itself.

Off a resurgent fourth season, “Handmaid’s” surprised with 21 nominations, including 10 for acting. Last year, it got 10 nominations total. While Grace was in the top five in the odds, she could’ve also easily missed, not just because the guest categories can be name-check-y but voters could’ve moved on from the show. The huge nomination haul is a sign they were still watching and took notice of a 15-year-old actress who stole the show in the season premiere “Pigs,” which also serves as her submission.

Grace, who’s arguably an industry vet with more than 50 credits to her name, plays Esther Keyes, a cigarette-smoking 14-year-old bride who secretly takes in fugitive Handmaids. Esther has been slowly poisoning her elderly husband and kills one of the men who had raped her, under June’s (Elisabeth Moss) directive, at the end of the season opener. Grace earned stellar notices for her performance while Esther became a fan favorite. By the end of the season, Esther has become a Handmaid.

The nomination was the more difficult hurdle for Grace, who is now definitely in it to win, especially with the surge in support for “Handmaid’s.” The Hulu drama has also dominated this category, winning three years in a row from 2017-19 for Bledel, Samira Wiley and Cherry Jones. Last year was the first time the show had ever lost drama guest actress, with “Succession” winning, ironically, for Jones. Bledel could benefit from familiarity and former winner status this year, but the “Gilmore Girls” alum also hasn’t won again despite being one of the few “Handmaid’s” stars to have been nominated for every season of the show so far.

If either Grace or Bledel takes home the award, “Handmaid’s” will only be one victory behind “Law & Order: Special Victims Unit,” which has a record five drama guest actress prizes. And if Grace wins, she’ll be the youngest guest performer to prevail, but not the youngest acting winner ever — that honor remains with Roxana Zal, who nabbed the Best Limited Series/TV Movie Supporting Actress Emmy at the age of 14 in 1984 for “Something About Amelia.”