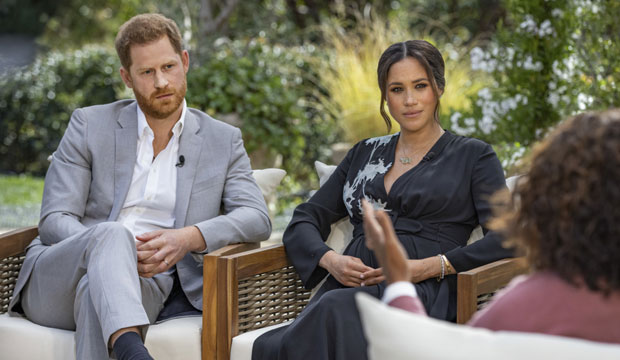 Much of the Emmy talk this year revolves around Prince Charles and Princess Diana, whose doomed marriage was portrayed last season on Best Drama Series front-runner “The Crown.” But they’re not the only royals on the Emmy ballot. Charles and Diana’s real-life son Prince Harry and his wife Meghan Markle, Duchess of Sussex, gave a bombshell interview about the royal family with Oprah Winfrey that’s also up for an Emmy. And it could win too.

“Oprah with Meghan and Harry” is nominated for Best Hosted Nonfiction Series or Special. The CBS broadcast featured a candid discussion of Markle’s struggles with mental health and antagonistic coverage from the British press. The couple also alleged racism within the royal family, spawning widespread online discussion and a million Winfrey reaction gifs.

SEEWill ‘The Flight Attendant’ soar above 3 ‘Ted Lasso’ episodes for the directing Emmy or will the race get ‘Hack’d?

This is the second year this award has been presented under this name. It was previously known as Best Informational Series or Special. The change was to represent “personality-driven programs in which the host drives the show’s narrative,” including “documentaries, travelogues, segmented/magazine program and interview formats.”

The Prince and Duchess themselves wouldn’t win an Emmy if the special prevails, but Winfrey would for hosting the interview. She’s up against “My Next Guest Needs No Introduction with David Letterman,” “Stanley Tucci: Searching for Italy,” “United Shades of America with W. Kamau Bell,” and “Vice.”

But the race is tricky to predict since there’s only one previous winner in the running (“Vice”) and it hasn’t won since 2014. “United Shades” claimed Best Unstructured Reality Program three times in a row (2017-2019), but this is its first time competing in this category. Instead, the front-runner in our odds is “My Next Guest,” probably due in no small part to David Letterman‘s long history of Emmy accolades.

But “My Next Guest” has yet to win this award despite two previous nominations (2018-2019), both of which it lost to “Anthony Bourdain: Parts Unknown.” Perhaps that’s why four of the Expert journalists we’ve surveyed from major media outlets think the “Meghan and Harry” interview will win: Clayton Davis (Variety), Eric Deggans (NPR), Christopher Rosen (Gold Derby), and Susan Wloszczyna (Gold Derby). So the Windsor clan could be all over this year’s kudos.

Why 'Squid Game' will win at SAG Awards: It's like 'Stranger Things' and 'Parasite' rolled into…