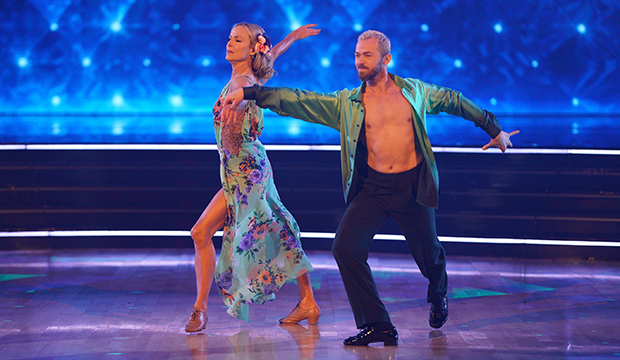 Melora Hardin was eliminated one week shy of the “Dancing with the Stars” finale, but the “Office” alum is more disappointed with her scores for what turned out to be her final week than the result.

The actress and her partner Artem Chigvintsev earned a total of 72 points for their two semifinal dances — 36 each for their redemption dance, a rumba, and for their contemporary. For the former, they received glowing praise from the judges for her marked improvement since she first danced the rumba in the second week, but only Len Goodman, who mentored the pair for the routine, gave her a 10.

“It didn’t feel like they were judging our performance from who we are, what we came from and how we performed tonight,” Hardin told “Us Weekly” after Monday’s show. “It felt like instead they were just sort of almost making random choices. They said all these incredible things [about our dances], but then the scores didn’t match the incredible comments they made, which was a bit disappointing and upsetting because I think we really danced like 10s tonight. We danced both of our dances like 10s.”

Hardin’s belief that they were underscored was reaffirmed when the other pros complimented her on the difficult routine. “All the pros came up to me and said they’ve never seen a female celebrity dance the rumba that beautifully,” she continued. “The rumba’s a really hard dance to do. It’s a really hard dance. It’s very technical and it’s got to be very flowy and central at the same time, but it’s incredibly technical.”

The couple, who had the third highest average score of the season, was second from the bottom on the leaderboard in the semifinal, ahead of only Cody Rigsby and Cheryl Burke. But they received the lowest combined total of scores and votes, and were immediately eliminated. Suni Lee and Sasha Farber followed them shortly out the door in the double elimination after the judges unanimously saved Amanda Kloots and Alan Bersten.

Kloots and Bersten, and JoJo Siwa and Jenna Johnson are the two couples with higher average scores than Hardin and Chigvintsev. Kloots and Siwa both have professional dance experience, and while the judges at the beginning of the season said they were scoring couples individually based on their week-to-week improvement, Chigvintsev doesn’t feel like that’s the case anymore.

“I think that kind of changed a little bit through the season, especially the semifinal today,” he said. “Now I think they’re directly comparing people against other people. Is that fair? Is it not? It’s not my place to judge. But at the same time, like, does that mean it doesn’t matter how good we try, we’re never going to get that 10 because somebody else is better? It makes you sometimes feel a little defeated.”