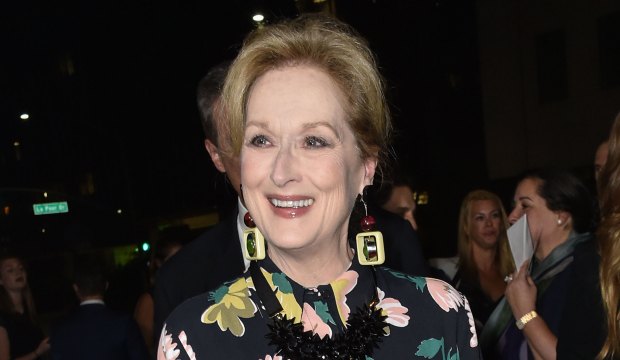 Given how much awards voters love Meryl Streep, it may be surprising that she’s only halfway to the EGOT grand slam of showbiz awards. She’s a three-time Oscar winner and three-time Emmy winner, but she doesn’t have a Grammy or a Tony yet. Well, she could cross Grammy off her list since she earned a nomination this year for Best Spoken Word Album for a recording of the children’s classic “Charlotte’s Web.”

This isn’t her first try at the Grammys. This is actually her sixth nomination, and almost all of those have been for children’s audiobooks. She was first nominated for Best Recording for Children in 1986 for “The Velveteen Rabbit.” Then she earned two nominations in that category in 1989 for “The Tailor of Gloucester” and “The Tale of Peter Rabbit.” And in 2008 she was nominated for Best Spoken Word Album for Children for “The One and Only Shrek.”

Her last nomination was her only bid for music: Best Compilation Soundtrack for the movie musical “Mamma Mia!” She might actually be nominated again in that category next year since she’s starring in the Netflix adaptation of the Broadway musical “The Prom.” But her current nomination for “Charlotte’s Web” is her first recognition from the recording academy in 12 years. And given how she has racked up wins from countless other awards groups, the recording academy may want to finally welcome her as one of their own too.

Even if she wins the Grammy, though, she’d still need a Tony to wrap up her EGOT. She earned one Tony nomination back in 1976: Best Featured Actress in a Play for “A Memory of Two Mondays / 27 Wagons Full of Cotton.” She hasn’t been on the Broadway stage in 43 years, but you don’t necessarily need to star in a show to win a Tony. EGOT recipients Whoopi Goldberg, Scott Rudin and John Legend won their Tonys for producing shows. So whenever theaters open back up in the wake of the COVID-19 pandemic, there may yet be ample opportunities for her to EGOT if she wants to.