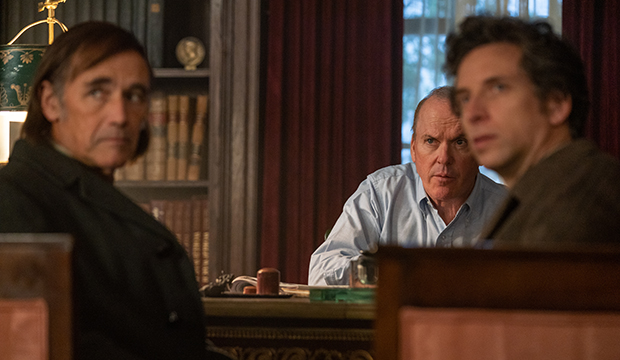 Michael Keaton is already in the history books as being cinema’s greatest Batman (sorry, this is not up for debate), but the actor made history again on Sunday night when he, as a member of the cast of “The Trial of The Chicago 7,” became the first person to ever win three film ensemble Screen Actors Guild Awards. The “Spider-Man: Homecoming” actor previously won as a member of the casts of “Birdman” (2014) and “Spotlight” (2015), both of which went on to win the Oscar for Best Picture.

“The Trial of the Chicago 7,” which received three SAG nominations in total and was leading Gold Derby’s combined odds to win ensemble heading into Sunday’s ceremony, had been the frontrunner all season long. It easily triumphed over the competition, which also included Lee Isaac Chung‘s “Minari,” a semi-autobiographical film about a Korean-American family starting a farm in Arkansas that several of Gold Derby’s Editors actually predicted to win instead. The rest of the film ensemble field was filled out by “Ma Rainey’s Black Bottom,” which featured one of Chadwick Boseman’s final performances, “One Night in Miami” and “Da 5 Bloods.”

Written and directed by Aaron Sorkin, “The Trial of the Chicago 7” tells the story of the real-life Chicago 7, who were anti-Vietnam War protesters charged with multiple crimes, including intention to incite a riot at the 1968 Democratic National Convention. Keaton had a small but important role in the movie, portraying Ramsey Clark, the United States Attorney General during the riots, in just two scenes. He was nominated alongside fellow cast members Sacha Baron Cohen (who was nominated individually for his performance), Yahya Abdul-Mateen II, Joseph Gordon-Levitt, Frank Langella, John Carroll Lynch, Eddie Redmayne, Mark Rylance, Alex Sharp and Jeremy Strong. Redmayne, who plays Tom Hayden in the film, famously bested Keaton when he took home the Best Actor SAG Award for his performance in “The Theory of Everything” (2014) on his way to winning the Oscar. It remains unclear if Keaton holds any grudges.