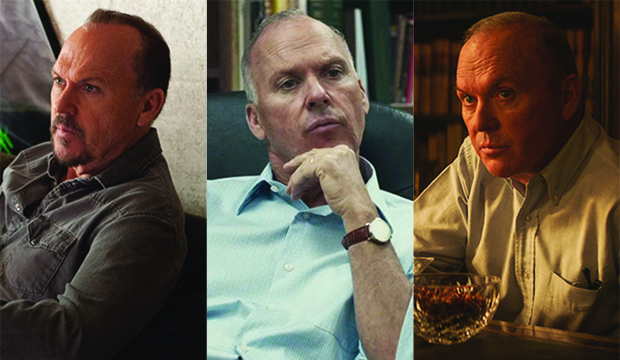 Michael Keaton made history at the Screen Actors Guild Awards when he, as a member of the cast of Aaron Sorkin’s “The Trial of the Chicago 7,” became the first person in SAG Awards history to win three ensemble prizes. He previously went home a winner as a member of the casts of “Birdman” (2014), for which he was also nominated individually, and “Spotlight” (2015). In fact, he has never lost the ensemble award. “Birdman” and “Spotlight” went on to win the Oscar for Best Picture. This leads us to wonder: Is Keaton the magic key to films winning both SAG ensemble and Best Picture? Could he help carry “The Trial of the Chicago 7” to a win come April 25?

It might sound ludicrous, but I’ve been stuck inside for a year so hear me out. While there isn’t a whole lot of data to investigate this admittedly far-fetched hypothesis, it is certainly undeniable that Keaton, an actor who is still probably best known for his portrayal of Batman and was once famous for displaying his comedy chops in films like “Night Shift” (1982), “Beetlejuice” (1988) and “Multiplicity” (1996), has now been a member of three SAG-nominated casts over seven years and each has won, with two later taking top prize at the Oscars.

This could just mean that Keaton has made some excellent choices since pivoting to more dramatic roles and experiencing a career resurgence. You could also argue that all three SAG-winning films in which he appeared, no matter how briefly (he was in just two scenes in “Trial”), were well made and featured very few weak links in their casts. But let’s break it down a bit further. Just when it looked like “Boyhood” was going to cruise through the season, “Birdman” swept the top industry honors, taking home SAG ensemble, the Directors Guild of America Award, the Producers Guild of America Award, and then the Oscars for both Best Picture and Best Director for Alejandro G. Inarritu. Sadly, Keaton didn’t manage to win for Best Actor. Still, his incredible performance anchored the entire film, so I’m going to go ahead and say he was also a big part of its success.

The following year, “Spotlight” had a more complicated path to Best Picture as the DGA (and the academy) chose to award Inarritu for “The Revenant” and the PGA sent “The Big Short” home with a win instead. The heavy but true subject matter of “Spotlight,” which told the story of The Boston Globe’s Pulitzer Prize-winning investigation into the Catholic Church’s child sex abuse scandal, might have contributed to its success more so than just Keaton’s performance as Walter “Robby” Robinson, who oversaw the paper’s investigative journalism team at the time. An ensemble piece through and through, “Spotlight” won a lot of ensemble awards that season, and the entire cast campaigned individually in supporting, but that didn’t stop category confusion or the New York Film Critics Circle from naming Keaton Best Actor. At the Oscars, though, the film only got two acting nominations, for Mark Ruffalo for supporting actor and Rachel McAdams for supporting actress.

The respective awards trajectories for “Birdman” and “Spotlight” don’t feel too similar to what’s going on with “The Trial of the Chicago 7,” which initially seemed to be made in a lab and specially formulated for an impressive awards run, what with its excellent cast and an Oscar winner at the helm. It even had the historical drama thing going for it that people love so much. But while it was liked well enough by critics, it has underperformed all season long and thus faces a much more difficult road to Best Picture. To date, the PGA has already awarded Chloé Zhao’s “Nomadland,” and Gold Derby’s current odds place her as being the big winner of this weekend’s DGA Awards while Sorkin, who was snubbed by the Oscars in directing, sits in dead last.

However, supporting the theory that “The Trial of the Chicago 7” might surprise us all and be on its way to winning Best Picture after taking home the SAG ensemble award with Keaton in tow is the small fact that the Netflix film, which much like “Spotlight” also tells a true story and features people fighting injustice, has now overtaken “Minari” for second place in Gold Derby’s combined odds. (Also like “Spotlight,” the “Trial” cast all campaigned in supporting.) “Nomadland” remains the frontrunner, as it has been all season long. What’s notable about this, you ask? Well, every year starting with “Spotlight,” the film that was second in the odds went on to win Best Picture over the apparent favorite. You can obviously take from that what you will (preferential ballot quirks, divisive frontrunners, etc). But if you believe in patterns, and if you believe that Michael Keaton is the key to winning both the SAG ensemble award and Best Picture at the Oscars, then you might be feeling pretty good about things right now.