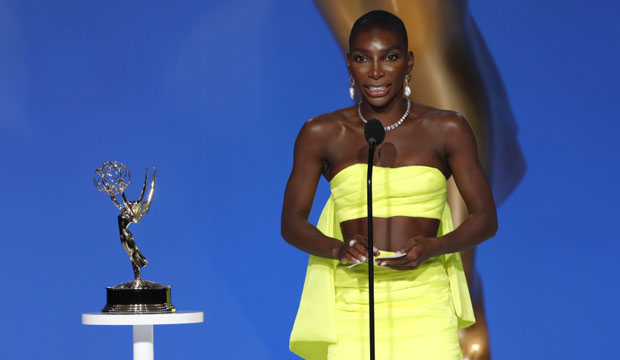 The 2021 Primetime Emmy Awards are in the books, and boy it was great to be mostly back to what we were used to from these types of programs. Probably the best thing about it was winners being able to deliver acceptance speeches in the presence of their co-workers and peers. Some of them were insanely funny and others were incredibly heartfelt and moving. With the ceremony now in our collective rearview mirror, let’s take a look at the six best speeches we got to hear during this year’s ceremony. And vote in our poll at the bottom of this post to let us know who you think had the best speech.

Waddingham’s win was a bit of a foregone conclusion, but she set an incredibly high bar with her triumphant speech. After screaming and exclaiming, “Jesus Christ on a bike,” she thanked the writers for not knowing how wonderful they are. Then she gave a beautiful shout-out to her co-star and fellow nominee Juno Temple, saying, “There’s no Rebecca without Keely, and if you ever leave my life, I’m going to stalk you.” She then recognized her parents, who she almost lost during the pandemic, and gave addressed her roots in theater by saying, “West End musical theater performers need to be on screen more. Please give them a chance because we won’t let you down.”

Goldstein managed to channel a little bit of his character, Roy Kent, in his remarks when he started off by saying, “I was very specifically told that I’m not allowed to swear. This speech is going to be f*cking short.” He then declared the cast of the show made him sick because they’re so excellent. And he closed in the spirit of Kent again by saying, “It’s the most privileged privilege of my life, and this is the f*cking icing on the cake.”

When the three writers made it up on stage, Statsky started by expressing their shock and then Downs jokingly rolled out a piece of paper and started pontificating, “When I was a young boy,” before being cut off by his wife and co-writer, Aniello. They gave the normal thank-yous that you would expect from winners in this category, but Aniello finished the speech with a great closer: “We also wanted to make a show about anyone who’s struggled to tell their story, especially women who never got to tell their story at all because the world wasn’t listening — it says stop, so I’m going to stop. So for those women, this is for them.”

Chrissy Shackleford had one of the funniest moments of the night while accepting the writing trophy by returning to the show’s recurring bit about the, shall we say, desirability of Adam Driver. Shackleford said in dedicating the award to him, “He knows what he did and we know what we’d like him to do.” When Oliver accepted the series award immediately afterward, he gave a great shout-out to fellow nominee Conan O’Brien and then paid a touching tribute to Norm Macdonald, who died just days before the Emmy ceremony. “No one was funnier the last 20 years than Norm MacDonald on late night comedy, so if you have any time in the next week, do what I did and just spend time YouTubing clips of Norm and Conan because it just doesn’t get better than that.”

Movie/Limited Writing: Michaela Coel, “I May Destroy You”

Coel gave a beautiful speech that I feel is best taken in by quoting it in its entirety: “Write the tale that scares you, that makes you feel uncertain, that is uncomfortable, I dare you. In a world that entices us to browse through the lives of others that help us better determine how we feel about ourselves and to in turn feel the need to be constantly visible, for visibility these days seems to somehow equate to success. Do not be afraid to disappear from it, from us for a while and see what comes to you in the silence.” She then dedicated her win to “every single survivor of sexual assault.”

Allen probably had the line of the night when she waved off the countdown timer for her speech by saying, “Honey, turn that clock off. I ain’t payin’ attention to it.” But the rest of her speech was just as incredible. She thanked “the gypsies, the dancers, the choreographers, the prophets, the poets who are my inspiration,” along with the people who gave her opportunities, from Captain Kangaroo to Steven Spielberg. And she finished with a closing that she knocked out of the park: “Let them know, for young people who have no vote, who can’t even get a vaccine … It’s time for you to claim your power. Claim your voice, sing your song, tell your stories. It will make us a better place.” She then pointed into the camera and simply said, “Your turn.”