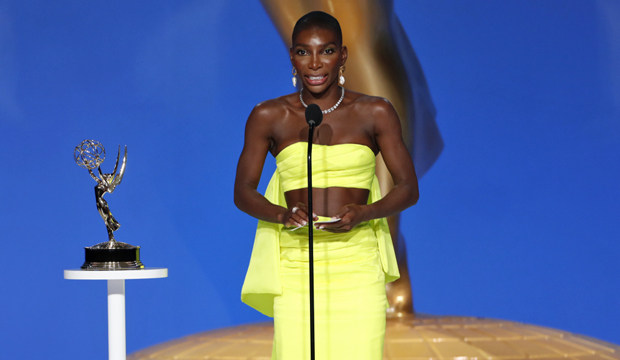 For the awards-obsessed writers and editors of Gold Derby, Emmys Sunday is one of the most anticipated days of the year. We eagerly await the opening of every envelope, listen intently to every speech and celebrate our savvy predictions while screaming over upsets we should have called. Below are our collective thoughts on Emmys 2021 from the best moments to the worst as well as those real head-scratchers. (See the winner’s list.)

Cedric the Entertainer! Yeah, he sorta disappeared around the midway point, but he kicked things off with a bang during the first half of the show. I wouldn’t be opposed to another Cedric-hosted Emmys next year. – Marcus James Dixon

The authenticity of so many speeches, from stars like Hannah Waddingham, Jean Smart, Kate Winslet and Olivia Colman. I love acceptance speeches with true emotion that speak from the heart, and the night was full of them. – Kevin Jacobsen

Jean Smart is a goddess of television. Her standing ovation was so well-deserved and her speech was amazing. This woman is an absolute perfect human being. – Tony Ruiz

Debbie Allen‘s marvelous speech when accepting the Governors Award, and an additional shoutout to anyone else who defied the tacky play-off music — yes, even Scott Frank. – Daniel Montgomery

“Mare of Easttown” taking home all three acting awards. After turning in stellar work for many years, both Evan Peters and Julianne Nicholson finally took home their career-first statuettes (both on their first tries) for what were incredible performances on “Mare.” Meanwhile, Kate Winslet took home her second Emmy for giving one of the best performances of the year. – Luca Giliberti

“I May Destroy You” not walking home empty-handed. How wonderful to see the multitasking star herself, Michaela Coel, take home the writing award for one of the most compelling and important series of at least the last year. – Luca Giliberti

“The Crown” and Peter Morgan finally being rewarded for their crowning achievement. Both were long overdue. – Luca Giliberti

Michaela Coel is one of the most exciting creative forces to come around in a while. I was so nervous she may go home empty handed, and I started screaming with joy when she won for writing “I May Destroy You.” I can’t wait to see what she does next. – Sam Eckmann

It was nice to see the wealth spread among the limited series. In such a competitive year with so many great nominees, it would have been a disservice for any to of them to sweep. I loved seeing “Mare of Easttown” win big in the acting categories while “The Queen’s Gambit” took the the top prize and directing. But Michaela Coel’s win for writing “I May Destroy You” was probably my favorite of all. – Denton Davidson

Conan O’Brien being the best loser ever. A tremendous mistake not having a Conan Cam on him at all times. – Joyce Eng

That was one of the best Emmy Awards in ages. A joy to watch these nominees and winners. Also, “Emmy Award winner Tobias Menzies” has such a wonderful ring to it. Finally, one of the best working actors of our generation has an Emmy to show for it! – Rob Licuria

Not that I would want anyone to base a vote on something from a different Emmy cycle, but it was nice seeing Evan Peters and the “Broad City” team go straight to wins after repeated nomination snubs last decade. – Riley Chow

The lame comedy bits with Ken Jeong and the Mike Pence fly. Were those necessary? Really? Considering that several winners’ speeches were cut off and that the ceremony went over by about 20 minutes, the answer is no. – Marcus James Dixon

Most of the bits simply fell flat. Why are we doing a bit about the VP debate fly? Very few of these will have any lasting value, especially when compared to the actual unpredictable moments. I wish producers would simply trust that the highlights will come authentically without trying to force them. – Kevin Jacobsen

“Pose” losing for Actress and Actor. If tapes still mattered, then both should have been on that stage. – Tony Ruiz

It’s time to reform the Emmys again. The era of peak TV means there’s more good content than ever before. But it also splinters viewership to the point that only a handful of the highest-profile shows can get any traction at all. Across 14 drama and comedy series categories, only three shows won anything: “Ted Lasso,” “Hacks,” and “The Crown.” Those three shows certainly deserved recognition, but there’s far more good TV than that. – Daniel Montgomery

The near-sweeps. As deserving as it was, “The Crown” was not the only good drama on TV this past season. It sweeping all seven main categories is a sign that voters did not watch a lot of TV this past season, which is a shame and a disservice to all the great content that was out there. – Luca Giliberti

The Emmys have long had an unfair bias against genre television (they even brought it up this year in the sketch where Alyson Hannigan mentioned the many snubs for “Buffy the Vampire Slyer”). But this year was the time to put that bias to rest and reward “WandaVision.” It was an incredible blending of sitcoms, superhero fare, and emotional turmoil. That Kathryn Hahn and Paul Bettany remain Emmy-less is a crime. – Sam Eckmann

Cloris Leachman and Ed Asner deserved better in in the In Memoriam segment, which was awfully directed to the point that you could barely read some of the names. – Joyce Eng

So, it wasn’t “Agatha All Along”? I love Julianne Nicholson as much as the next guy, but Kathryn Hahn OWNED pop culture this year with that singular, iconic performance in “WandaVision.” I am crushed. – Rob Licuria

Bo Burnham, Emma Corrin, Amanda Peet and John Wilson were the ones that blew me away this Emmy cycle and the academy paid them dust tonight. At least Best Comedy Series went to my favorite comedy of the season for the first time in 16 years. – Riley Chow

For as many strides the Television Academy is making in nominating a diverse group of artists, this was a blindingly white show when it came to winners, outside of RuPaul and Michaela Coel. It was also pretty homogenous, with acting sweeps for “The Crown,” “Ted Lasso” and “Mare of Easttown.” Feels like some sort of internal analysis should be done to get to a place of truly embracing the breadth of television out there. – Kevin Jacobsen

I’m with Seth Rogen on this one: why is Hollywood holding a crowded, indoor event without any masks? At a time when some parents are protesting mask requirements in schools meant to keep children and staff safe amid the COVID Delta variant (which can be transmitted even by vaccinated people in the event of breakthrough infections), the Emmys telecast was uncomfortable to watch, even with their vaccine requirements. – Daniel Montgomery

“The Handmaid’s Tale” being completely shut out and, with its 0-for-21 record, seeing the biggest shutout in Emmy history. The show’s fourth season, which earned the show its highest nomination total for a single season to date, was an immaculate achievement that should have been recognized with multiple rewards, including one for its star, Elisabeth Moss, who gave arguably the best performance of the year. – Luca Giliberti

If Ken Jeong was insistent on performing the most un-funny sketch in years, I’d bar him from my event too. They played off legends like Jean Smart for this? – Sam Eckmann

Cutting off a number of speeches to make room for the awful “comedy” sketches was tacky. It would have been slightly more acceptable if the skits were actually funny. – Denton Davidson

The less we talk about the Scott Frank moment, the better. – Joyce Eng

I am sick and tired of awards shows wasting time on stupid comedy sketches  and then having to play-off winners in their moment of glory. Stop it! The next time it happens, I say we storm the Capitol! – Rob Licuria

The Emmys have not adapted to how fractured viewing is in the streaming age, so the few shows that everyone has watched in the last few years have ended up dominating like almost nothing did in the first seven decades of Emmy history. – Riley Chow