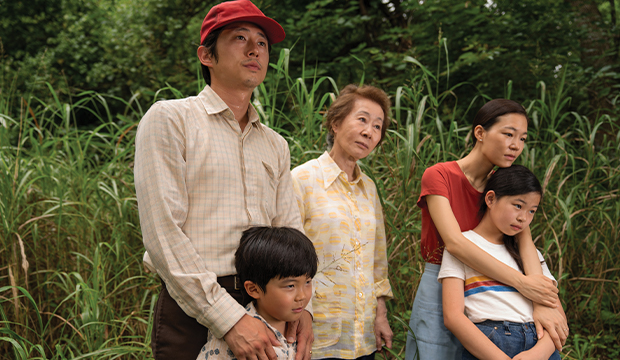 Gold Derby’s Experts are nearly unanimous that “The Trial of the Chicago 7” will win Best Film Ensemble at the 2021 SAG Awards. On paper it seems like a safe bet as it boasts a huge cast full of famous faces, its content is timely, and it is a Best Picture Oscar front-runner. But I think these savvy prognosticators are overlooking a true gem of an ensemble — the one with mostly unknown actors that you want to wrap your arms around after watching them in action. The “Minari” cast. Below, I lay out my 4 reasons why director Lee Isaac Chung‘s semi-autobiographical film will win the SAG ensemble prize despite the fact that none of our Experts are predicting it.

1. The cast plays off each other
SAG voters love when the entire cast interacts with one another, as opposed to movies where some actors never appear in the same scenes as their co-stars. As “Minari” is about a 1980s Korean-American family struggling to survive on an Arkansas farm, there are plenty of moments where they’re all together, playing off each other. Steven Yeun (as dad Jacob) and Yuh-jung Youn (as grandma Soon-ja) were singled out individually by the actors guild, while the other nominated ensemble players are Noel Kate Cho, Yeri Han, Scott Haze, Alan Kim and Will Patton. Another movie about a close-knit family just won last year, “Parasite,” but a more apt comparison might be 2006 champ “Little Miss Sunshine” — heck, Alan Arkin‘s quirky grandfather character even shares a similar on-screen story to “Minari’s” Soon-ja.

2. The female contingent
In recent years, the Screen Actors Guild winners in film and TV have notably honored casts dominated by women. From “Chicago” (2002), “The Help” (2011) and “Hidden Figures” (2016) claiming Best Film Ensemble, to “Desperate Housewives” (2004-05), “Grey’s Anatomy” (2006), “Orange is the New Black” (2014-16) and “The Marvelous Mrs. Maisel” (2018-19) winning Best TV Ensemble, a project with stand-out female characters like “Minari” seems to fit the pattern perfectly. In addition to Yuh-jung Youn, the movie also focuses heavily on Yeri Han (as mother Monica) and Noel Kate Cho (as daughter Anne). Only one of the other 2021 film ensemble nominees, “Ma Rainey’s Black Bottom,” stars a woman in the leading role (SAG fave Viola Davis). The other three casts are overwhelming male-centric: “Da 5 Bloods,” “One Night in Miami” and “The Trial of the Chicago 7.”

SEE‘Nomadland’: No SAG ensemble bid, no problem heading into Oscars

3. Quarantine blues
I’ll give my colleague Zach Laws credit for this one. With the Covid-19 pandemic canceling many Americans’ plans this past year, seeing a family enjoying each other’s company on-screen is like peering into a hopeful alternate world. They’re hanging out without masks! They’re touching each other without washing their hands! Most SAG voters have been dutifully quarantining inside their homes for a year now, so don’t underestimate their desire to see themselves as long-lost members of the Yi family and feel that personal connection they’ve been missing.

4. It’s the best cast — period
Taking all of the other reasons out of play, I believe “Minari” will win the top SAG Award because the cast is simply “wonderful, wonderful.” Oftentimes awards prognosticators get caught up on little things like patterns, rules and precedents and forget to take into consideration the quality of the contender, in this case the ensemble. The core five family members radiate in their roles and all deserve the onslaught of attention that’s about to come their way. Last year the “Parasite” group received a rousing standing ovation on the SAG stage, so my fingers are crossed there will actually be a ceremony this year so the “Minari” folks can have the same experience.

Oscar nominee Jesse Buckley's next film is here: Watch the trailer for 'Men'

Oscars 2022: Who are the 27 presenters announced so far; why haven't performers been confirmed yet?