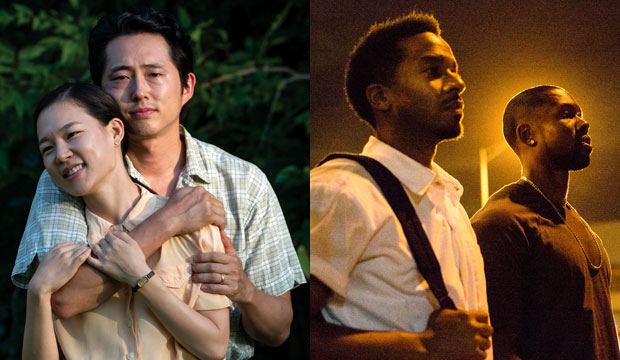 “Minari’s” Oscar hopes took a hit when it lost the SAG Award for best ensemble cast to “The Trial of the Chicago 7” … or did they take a hit? Even though the film hasn’t won a lot of top categories during the awards season so far, it’s starting to remind me of “Moonlight” (2016), which also seemed like an underdog during its season before it ascended to the top in one of the biggest Oscar upsets in history.

“Moonlight” was a wildly unconventional Oscar winner in that it was a low-budget independent movie centered on a poor, gay, Black lead character coming of age in Miami, Florida. It wasn’t full of A-list stars. It wasn’t from a director with an established track record at the Oscars (it was Barry Jenkins‘s first nominated movie). And though it had political resonance in its story about growing up marginalized in a community overwhelmed by drugs, it wasn’t about grand-scale historical events like “The King’s Speech” (2010), “Argo” (2012) or “12 Years a Slave” (2013).

SEEAfter SAG Awards, who’s up and who’s down in the Oscar race for Best Picture?

It was also atypical because it didn’t win many other top prizes on the campaign trail. It won the Golden Globe for Best Film Drama, but that was its only win there, and it didn’t have to face “La La Land,” which competed as a comedy/musical and won all seven of its nominations. “La La Land” proceeded to win at the Critics Choice Awards, Producers Guild Awards, Directors Guild Awards, and BAFTAs. The one place “La La Land” wasn’t nominated was the ensemble prize at the SAG Awards, but even then “Moonlight” lost to “Hidden Figures.” But it won the Oscar anyway, perhaps because it had the underdog rooting factor that kept it from being ranked too low by voters on their preferential ballots.

Now “Minari” is in a similar position. Like “Moonlight,” it’s an A24 film with political resonance but on a small scale: it’s a semiautobiographical story about a Korean-American family starting a farm in Arkansas. And like “Moonlight,” it has been an also-ran at most awards. It won the Golden Globe for Best Foreign Language Film, where it didn’t have to compete against Oscar front-runner “Nomadland.” Then it lost at the Critics Choice and PGA Awards to “Nomadland.” And where “Nomadland” wasn’t nominated — best cast at the SAG Awards — it still lost to “Trial of the Chicago 7.”

But it has a strong rooting factor anyway, as evidence by the outpouring of love we’ve seen for the film. When Alan Kim won Best Young Actor/Actress at Critics Choice his tearful speech was so moving that it went viral. And when Yuh-Jung Youn won for her individual performance at the SAG Awards, even her opponents seemed overjoyed for her victory. It feels similar to the groundswell of emotion we saw last year for “Parasite,” whose cast received a standing ovation at the SAG Awards just for coming on stage to introduce their movie.

And there’s always the risk that a longtime front-runner like “Nomadland” will raise expectations so high that Oscar voters are ultimately disappointed by it, whereas “Minari” still feels like the little movie that could. As with “Moonlight,” it’s hard for me to imagine “Minari” ranked low on very many preferential ballots. A moment, though, to acknowledge the pandemic-year weirdness of “Nomadland” being considered the top dog when it too is a plucky underdog movie in the context of Hollywood at large. But that weirdness is one of the reasons why we shouldn’t rule out surprises even if the race looks on paper as if it’s sewn up for one movie or another.