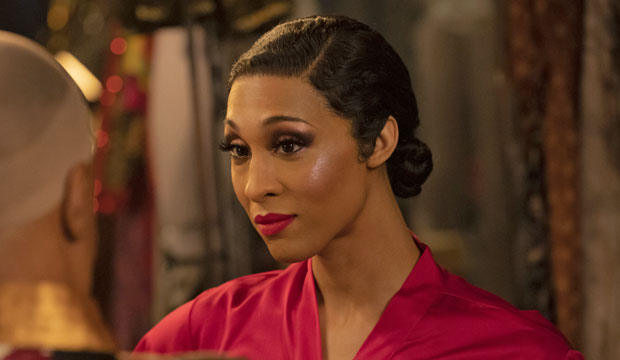 Following decades of underrepresentation, members of the trans community had reason to celebrate in 2014 when Laverne Cox (“Orange is the New Black”) became the first trans person ever nominated for an acting Emmy (Best Comedy Guest Actress). From there, it took just seven more years for a trans performer to break into one of the TV academy’s major categories, as Mj Rodriguez (“Pose”) competed for Best Drama Actress only four months ago. Although she was bested by Olivia Colman (“The Crown”), she now has another shot at glory this winter in that she may become the first trans nominee and winner of an individual Screen Actors Guild Award.

Rodriguez starred as Blanca Rodriguez-Evangelista on all three seasons of FX’s “Pose,” which aired its final episode in June. As the mother of New York City’s fictional House of Evangelista, she was depicted as a major figure in the ballroom culture scene of the 1980s and 1990s. Over the course of a decade, she continually rose above adversities brought on by her trans identity and HIV-positive status while remaining a supportive force in the lives of her friends and chosen family members.

Rodriguez currently ranks fourth in our SAG TV Drama Actress race with 11/2 odds. Her possible competitors include her fellow 2021 Emmy nominees Elisabeth Moss (“The Handmaid’s Tale”) in third place and Uzo Aduba (“In Treatment”) in seventh. Colman and the other members of that lineup (Emma Corrin, “The Crown” and Jurnee Smollett, “Lovecraft Country”) are ineligible for SAG nominations this time, as they were already recognized for their most recent work last year. The same applies to this SAG category’s most recent champion, Gillian Anderson (“The Crown”).

Also in the running are three women from “The Morning Show” (Jennifer Aniston, Julianna Margulies, and Reese Witherspoon) and two from “Succession” (J. Smith-Cameron and Sarah Snook). Aniston’s previous victory for this role in 2020 has helped her take the top spot in our ranking. She also triumphed as a member of the “Friends” ensemble in 1996. Margulies won eight SAG awards for her work on “ER” and “The Good Wife” between 1996 and 2011, while Moss won two for “Mad Men” in 2009 and 2010 and Aduba won five for “Orange is the New Black” between 2015 and 2017.

In addition to breaking new ground as the first trans solo SAG nominee, Rodriguez could make further history along with several of her castmates if they snag an ensemble bid. Although Cox and Hari Nef (“Transparent”) have contended for the comedy ensemble prize, no trans actor has ever done so on the drama side. At 31, Rodriguez could also be her individual category’s second youngest winner (after 27-year-old Anderson, “The X-Files,” 1996), as well as its third Black winner (after Chandra Wilson, “Grey’s Anatomy,” 2007 and Viola Davis, “How to Get Away with Murder,” 2015 and 2016) and second final-season winner (after Edie Falco, “The Sopranos,” 2008).