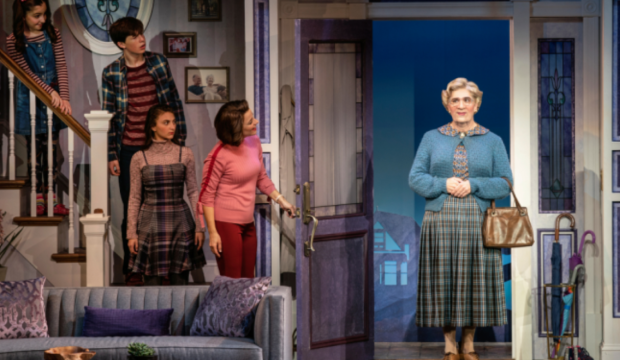 Almost thirty years after Robin Williams played “Mrs. Doubtfire” on the big screen, a musical adaptation has bowed on Broadway. The farcical plot follows divorced father Daniel, who dresses as a female housekeeper in order to spend time with his children. The film is best remembered for Williams’ singular performance and won the Oscar for Best Makeup. The material has been modernized, however slightly, for the stage and stars Tony-nominee Rob McClure in Williams’ role. “Mrs. Doubtfire” opened at the Stephen Sondheim Theatre on Dec. 5.

The new musical features a score by Tony-nominated songwriters Wayne Kirkpatrick and Karey Kirkpatrick of “Something Rotten!,” a book by Karey and Tony-nominee John O’Farrell, and direction by the prolific Jerry Zaks, who has four Tony Awards for his direction of plays and musicals.

SEE ‘Diana, The Musical’ reviews: ‘Cold and crass’ new show fails to live up to its beloved subject

“Doubtfire” earned mixed reviews from critics. Maya Phillips (New York Times) says the musical “simultaneously tries to replicate an outdated story and update it for the times. But the show only ends up cowering in the original film’s shadow.” She notes that the musical doesn’t make its new material as compelling as its source material, writing that “the scenes that draw the biggest laughs here are still the ones that are almost identical to the ones in the film.” Even so, she applauds McClure, who is “vivacious on the stage, and his impressions […] are precious.”

Naveen Kumar (Variety) largely agrees, calling the production “polished and pandering,” “a drawn-out and predictable comedy.” For a screen-to-stage adaptation, he says the show feels “doggedly risk-averse, opting for handsomely outfitted, faithful simulacrum over reinvention or surprise.” Kumar similarly praises McClure, though, writing he “delivers an undeniably charming and virtuosic performance,” and he also singles out the “young standout” Analise Scarpaci as Daniel’s oldest daughter as well as Charity Angél Dawson as the child custody liaison. He also spotlights the design team for the “meticulously detailed, almost lavish” set that is “impeccably lit.”

Many of the reviews highlight how the show problematically deals with gender, as much of the comedy of the film and musical derives from Daniel’s dressing as and pretending to be a woman. Kumar writes that the humor feels “cheap” and “retrograde.” Helen Shaw (Vulture) agrees, writing that director Zaks and “the all-male writing collective miss a lot,” and that “you can sense the production trying to appeal to the largest number of folks without getting rapped on the knuckles for insensitivity.” She calls the music “often serviceable but unsparkling,” but appreciates the performances: McClure is “lovable and quick,” Brad Oscar “brilliant,” and Scarpaci “kills” her solos. She also gives kudos to the designers, noting, “Certain miracles have been created by prosthetics designer Tommy Kurzman and costume designer Catherine Zuber.”

In a crowded season, “Mrs. Doubtfire” might struggle to win the hearts of the Tony nomination committee, even though movie adaptations have tended to fare well. In 2019, both “Tootsie” and “Beetlejuice” scored Best Musical bids, as did the original musical comedy “The Prom.” In recent years, “Mean Girls,” “Groundhog Day,” and “School of Rock” all successfully transferred from screen to stage and earned nominations for the top prize. But as the industry’s awareness of and sensitivity toward gender expression grows, nominators may not want to reward “Doubtfire.” It will also have to contend with a large number of original musicals bowing this season: “Six,” “Girl from the North Country” “Diana,” “Flying Over Sunset,” “MJ The Musical,” “Paradise Square,” and “Mr. Saturday Night.” These eight shows will compete for just four slots, and with “Six” and “North Country” already receiving strong reviews, it seems likely “Doubtfire” will get squeezed out.

The one nomination “Doubtfire” looks likely to score is for Best Actor for McClure. McClure is a stalwart of the Broadway community, appearing in six productions in the last 10 years and earning a Tony nomination for his leading role in the short-lived musical “Chaplin.” He has honed his skills at musical comedy by originating roles in “Honeymoon in Vegas” and “Beetlejuice,” starred as a replacement in “Something Rotten!,” and appeared in a revival of the comedic play “Noises Off.” After so much good work and these great reviews for “Doubtfire,” McClure will likely earn his second nomination. The field will get crowded as the season progresses, though, with performances from Harry Hadden-Paton and Tony Yazbeck (“Flying Over Sunset”), Myles Frost (“MJ The Musical”), Hugh Jackman (“The Music Man”), Billy Crystal (“Mr. Saturday Night”) and others coming soon, so McClure’s Doubtfire might not be able to vacuum his way to the nomination.