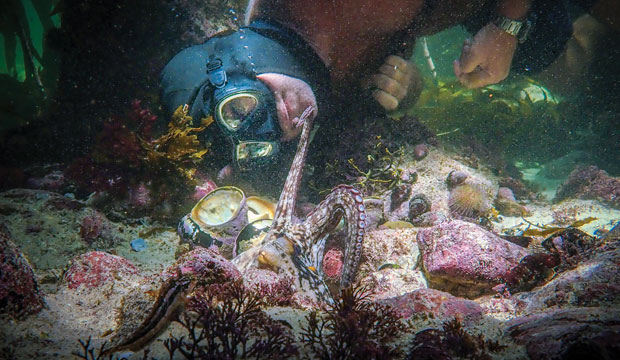 When “My Octopus Teacher” won the Producers Guild Award for Best Documentary on March 24, I started to wonder if that clears the path to it winning the Oscar. It’s an emotional, heartwarming film about nature, and feel-good movies sometimes have an advantage over investigative docs and grittier subjects.

“My Octopus Teacher” is also the kind of crowd-pleaser that often beats heavier critics’ picks. It tells the story of filmmaker Craig Foster‘s year of visits with an octopus living in a South African kelp forest and the emotional attachment he develops with it as he learns about its life cycle and behavior, and even its personality. The film has an environmentalist bent like past Oscar winners “March of the Penguins” (2005), “An Inconvenient Truth” (2006) and “The Cove” (2009), and it also has the inspirational uplift of champs like “Man on Wire” (2008), “Undefeated” (2011), “20 Feet from Stardom” (2013) and “Free Solo” (2018).

Based on the combined predictions of Gold Derby users as of this writing, the Oscar front-runner is “Time,” which is also an inspiring story, but with grittier subject matter: restorative justice and the prison system. Then there’s “Collective,” a dark film about a deadly fire and the corruption it reveals. “My Octopus Teacher” does have another inspirational rival: fellow Netflix doc “Crip Camp,” about a community of disabled people that successfully fought for greater accessibility in public spaces. And hard-hitting films have won in recent years (2007’s “Taxi to the Dark Side,” 2010’s “Inside Job,” 2014’s “Citizenfour”). So it’s not necessarily a slam dunk for “Octopus,” but don’t be surprised if it wraps its tentacles around the trophy on April 25.