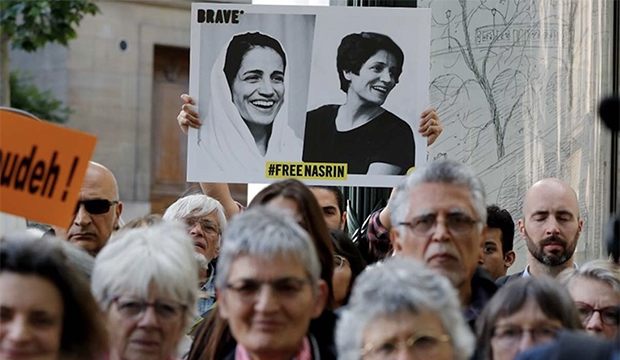 When it comes to the Best Documentary Oscar race, it helps when films have a face that voters can root for. Sure, voters often want to reward a topic that feels relevant or important, and they surely desire quality filmmaking. But history shows that giving audiences a clear protagonist to follow and care about improves a movie’s chances of being nominated. With that in mind, Oscar pundits would be wise to keep an eye on “Nasrin” and its secret weapon: its fierce and endearing subject Nasrin Sotoudeh.

Directed by Emmy nominee Jeff Kaufman (“American Masters”) and narrated by Olivia Colman, the doc, filmed secretly in Iran, follows human rights lawyer Sotoudeh on her quest for justice against an oppressive regime. Many of her clients are set to be executed and she vigorously fights against the use of the death penalty. Her biggest cause, however, may be rebuffing unjust mandatory hijab laws for Iranian women.

But it’s not all courtroom drama. The film paints a deeply personal portrait of Iran’s fiercest women’s rights advocate. We see her work tirelessly for her clients but also witness her home life as a loving mother and wife. Sotoudeh’s deep affection for her country, the arts and the human spirit is on beautiful display. When she is jailed for her activism and separated from her family, it’s a brutal moment that stings your heart. Those unaware of her brave efforts for equality in the face of oppression and corruption will be rooting for a new real-life superhero after viewing the documentary.

This rooting factor could help the movie land in the highly competitive Best Documentary Feature race at the Oscars. Past winners in the category have featured personal stories that made it easy for voters to fall in love with the subject, and therefore the film. “Searching for Sugarman” won over the academy with an appealing portrait of Sixto Rodriguez. “Amy” tugged at everyone’s heartstrings by documenting the complicated and tragic life of the late Amy Winehouse. “20 Feet From Stardom” offered several protagonists, such as Darlene Love, Judith Hill and Merry Clayton, as they fight to become more than just backup singers.

It’s nearly impossible not to fall in love with Sotoudeh as she works tirelessly and courageously in her mission. At one point in the documentary, the lawyer addresses a crowd of artists and declares that “art is the best way to take on tyranny.” How fitting that a piece of art has been created to illustrate Sotoudeh’s massive contributions to human rights in Iran. Oscar voters will be cheering for this brave woman throughout the film and may just reward it with a nomination — their own small act of solidarity by supporting art.