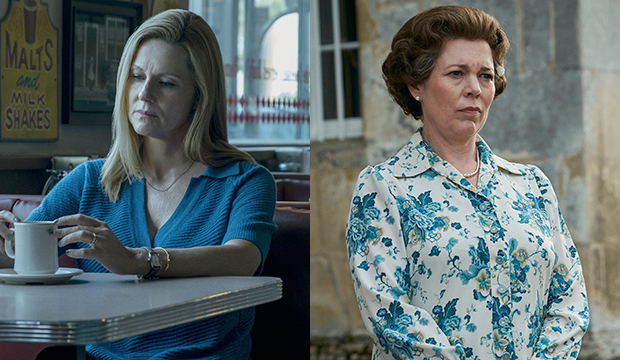 For the first time ever, one network has dominated the Best TV Drama Actress category at the Screen Actors Guild Awards. Netflix occupies all five nomination slots, unveiled Thursday morning, with Julia Garner and Laura Linney representing “Ozark” opposite Gillian Anderson, Emma Corrin and Olivia Colman representing overall nominations leader “The Crown.” Corrin had not previously been nominated by SAG, Garner has two prior nominations, Colman and Linney are SAG winners, and Anderson is a two-time SAG winner.

This Netflix sweep had been predicted by Gold Derby’s racetrack odds, with eighth- and ninth-ranked Jodie Comer and Sandra Oh, both of BBC America’s “Killing Eve,” having been the only actresses not from Netflix who were thought to be viable contenders; all below them had 100-to-1 odds.

Best TV Comedy Actor is the only SAG category that had previously seen its nominees come exclusively from a single network, as NBC dominated in 1995, 1996 and 1997. Jason Alexander (“Seinfeld”), Kelsey Grammer (“Frasier”), David Hyde Pierce (“Frasier”) and Michael Richards (“Seinfeld”) were nominated all three of those years. Paul Reiser (“Mad About You”) rounded out the race the first year, when Pierce won. John Lithgow (“3rd Rock from the Sun”) replaced him and won both other times.

Netflix is now the single streaming service to have achieved the feat and this is the first time that it has happened in a drama or actress category or an actress category. Netflix went four for five when Claire Foy (“The Crown”) won consecutive trophies. The lone non-Netflix nominee four years ago was Thandie Newton (HBO’s “Westworld”), who was replaced by Elisabeth Moss (Hulu’s “The Handmaid’s Tale”) three years ago.

SAG has given four of five nomination slots to a single network/service 13 times. Netflix was the quadruple nominee the last four times. The first four times were in the 1990s by NBC. HBO then did it five times. The first eight times that a network took four out of five slots, that network won, but the dominant network/service has lost in three of the last five instances.