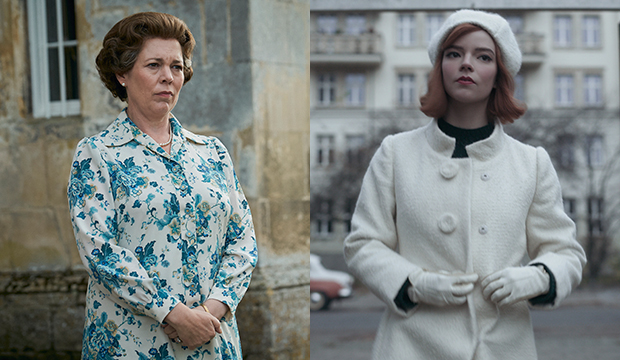 Despite Ken Jeong’s joke that “Netflix’s days are numbered,” the streamer just had its best-ever performance at the Emmy Awards. After nine years of nominations for the biggest prize of the night, Netflix has finally won not one, but two of the top honors with victories in Best Drama Series for “The Crown” and Best Limited Series for “The Queen’s Gambit.”

These two programs contributed significantly to Netflix’s best outing at the Emmys. Before Sunday night’s Primetime Emmy Awards, Netflix had a sizable trophy advantage over its closest streaming and premium cable competitors Disney+ and HBO with 34 victories from the Creative Arts alone versus 13 and 10, respectively. Across all four Emmy ceremonies, Netflix won a total of 44 trophies out of its 133 total nominations. Though its nominations tally dropped nearly 17% from last year when it had 160 nominations, it far outperformed itself year-over-year in terms of victories, topping its 21 wins last year. This total also trounces its 2019 total of 27 wins, demonstrating the streaming giant’s incredible 2021 surge.

In addition to its Drama and Limited series wins, Netflix’s biggest victories of the main ceremony included all four drama acting categories for “The Crown” (Josh O’Connor, Olivia Colman, Gillian Anderson, and Tobias Menzies) and Ewan McGregor for “Halston.” A total of 13 programs contributed to Netflix’s 44 victories, which was one winning series shy of last year’s 14. “The Queen’s Gambit” and “The Crown” led the pack with 11 wins apiece. Below, see the complete list of Netflix shows that won 2021 Emmys.

David Attenborough: A Life on Our Planet – 3
Best Cinematography for Nonfiction Programming
Best Music Composition for a Documentary Series or Special
Best Sound Mixing for a Nonfiction or Reality Program