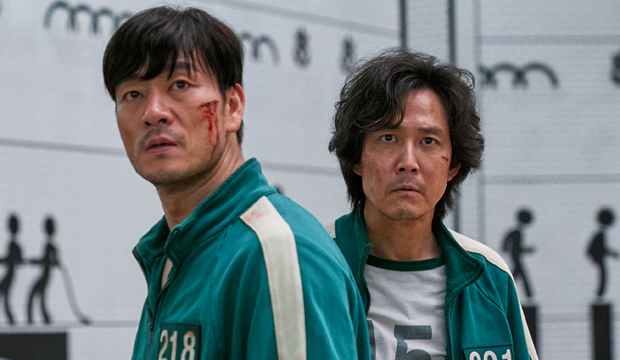 And the Emmy goes to … “Squid Game”?! Yes, those words could indeed be spoken next year, as Variety reports the Korean-language thriller that has all of the world glued to their TVs is eligible for 2022 Emmys. But there’s a twist. The Netflix ratings juggernaut has to choose whether it wants to compete at the Primetime Emmys or the International Emmys, in accordance with a long-standing rule that prevents shows from double-dipping at both organizations.

SEEOscar Experts slugfest: Will voters Bond with ‘No Time to Die’ and Emmy champs Ann Dowd and Jodie Comer? [WATCH]

Those who’ve seen “Squid Game” are accustomed to fun twists (and gunshots to the head), so this news shouldn’t come as a surprise. In fact, making the production company choose between the Television Academy and the International Academy is exactly the kind of game the characters would be forced to play. Since the show was produced under Netflix’s guidance with the intention of being distributed to United States audiences, it is eligible for the Primetime Emmys. And because it was produced in South Korea, it has the right to submit at the International Emmys. Think of it like an Emmys tug-of-war.

Netflix dropped all nine episodes of the show on September 17 and it quickly became a word-of-mouth sensation. If you’ve been living under a honeycomb, “Squid Game” tells the story of down-on-their-luck people who agree to play dangerous versions of childhood games in order to win a monumental cash prize. We don’t want to give anything away, but suffice it to say, of the 456 competitors who play Game 1 only a small number are left to play Game 6. (In other words, the casket-and-bow industry is thriving.) Hwang Dong-hyuk created the series and wrote and directed every episode. The cast members include Lee Jung-jae, Park Hae-soo, Jung Ho-yeon, O Yeong-su, Heo Sung-tae, Anupam Tripathi, Kim Joo-ryoung and Wi Ha-joon.

Could a program as violent and bleak as “Squid Game” actually be something Emmy voters might rally around? Absolutely! In recent years we’ve seen darker-than-usual fare like “Game of Thrones,” “The Handmaid’s Tale,” “Breaking Bad” and “The Sopranos” all take home bucket-loads of trophies. Since “Squid Game” has not been officially greenlit/redlit for a Season 2, it will likely compete in the limited series races, as opposed to the drama categories.

Here is the Television Academy’s fine print: “Foreign television production is ineligible unless it is the result of a co-production (both financially and creatively) between U.S. and foreign partners, which precedes the start of production, and with a purpose to be shown on U.S. television. The producer of any production produced in the U.S. or outside the U.S. as a co-production between U.S. and foreign partners, in a language that is substantially (i.e. 50% or more) in a language other than English, shall have the discretion to enter the production and its individual achievements in any category where they are eligible in the Primetime Emmy Awards competition or in the awards competition of the International Academy of Television Arts & Sciences, but not both.”