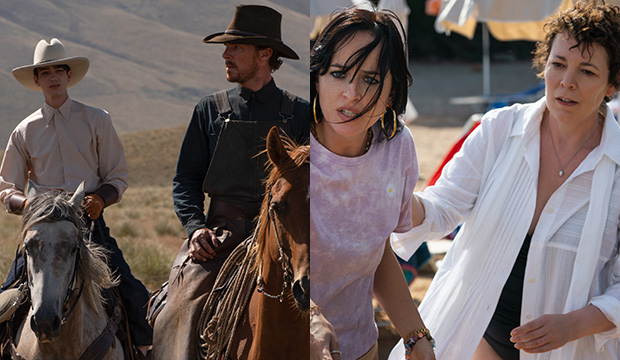 Welcome to Oscar Experts Typing, a weekly column in which Gold Derby editors and Experts Joyce Eng and Christopher Rosen discuss the Oscar race — via Slack, of course. In a special mid-week entry, we survey Friday’s possible New York Film Critics Circle winners as December kicks off and with it an onslaught of critics awards.

Christopher Rosen: Hello, Joyce! It’s a big week for us. We saw “West Side Story,” we’re seeing “Nightmare Alley,” the National Board of Review will announce its nominees on Thursday, and the New York Film Critics Circle will bestow honors to the year’s top movies and performers on Friday. Critics groups are not always the most reliable Oscars precursors — FYC, New York Film Critics Circle Best Supporting Actress winner Tiffany Haddish for “Girls Trip” — but I do think there’s the possibility that the New York group could bring some long-shot contenders back into the conversation. So let’s start with some actors I think could make hay on Friday — based solely on the anecdotal evidence I have from being friends with a few members of the group who are sworn to secrecy about their votes. Best Actor is loaded, but I can’t help but think Simon Rex is a serious threat here for the NYFCC vote. He rules in “Red Rocket,” a firecracker indie movie that has huge “Uncut Gems” vibes — and it would be great to have him back in play for a long-shot nomination. It just feels right, right? Then there’s our pal, Mr. Ben Affleck. Last year, NYFCC gave Chadwick Boseman its supporting actor award for “Da 5 Bloods” — which was a surprise because most expected Boseman to win for lead actor with “Ma Rainey.” But having multiple acclaimed performances usually helps. Here’s the NYFCC rule book: “The ballots shall specify achievement in a single film. Should the issue of multiple achievements within the calendar year arise, a majority of members present shall decide whether one or more achievements shall be recognized.” All of which is to say Affleck has two really strong performances this year and if there’s ever a group that might lean toward his unhinged work in “The Last Duel,” it might be the NYFCC. But what do you think, Joyce? Will chaos reign there and is this where Kristen Stewart will win the first of what we assume will be many critics’ prizes?

joyceeng: I’ve long said that Affleck is the perfect candidate for those “body of work” wins several critics groups like to hand out when an actor has multiple projects in a year. NYFCC awarded Laura Dern two years ago for “Marriage Story” and “Little Women,” and in supporting actor, they gave it to Matthew McConaughey, in the early stages of the McConaissance, for “Bernie” and “Magic Mike” nine years ago. Ben would be a similar type of win should they choose to crown him for “The Last Duel” and “The Tender Bar,” and you would love to see it. As for KStew, I feel like she might be too obvious of a winner. In that she’s the Oscar frontrunner and the last three NYFCC Best Actress champs have been a tad more left of center: Regina Hall for “Support the Girls,” Lupita Nyong’o for “Us” and Sidney Flanigan for “Never Rarely Sometimes Always.” Nyong’o came the closest to an Oscar nomination, which was probably not that close since she was competing with a horror film. I can see this going to Renate Reinsve for “The Worst Person in the World” or more high-brow Oscar contenders but famous names like Penelope Cruz for “Parallel Mothers” or Olivia Colman for “The Lost Daughter.” I can even see Alana Haim taking it for Peak LA film “Licorice Pizza” — lest we forget, NYFCC was the one to award Best Picture to “La La Land,” not LAFCA. Last year, NYFCC gave the top prize to “First Cow,” which did not get a single Oscar nomination. I don’t think that’s happening again, but who knows what these crazy kids will do. I suppose “The Power of the Dog” is the safest prediction here.

SEE Oscar Experts Typing: Will the academy open its doors to ‘House of Gucci’?

Christopher Rosen: It’s true, the stars are aligned for “The Power of the Dog,” which has critical acclaim and the kind of highfalutin sheen of a critics group Best Picture winner. But I can also see a spread-the-wealth scenario. Last year, the New York critics gave Chloe Zhao their Best Director award but didn’t go for “Nomadland” itself. Jane Campion feels like a slam-dunk winner for Best Director this year (were she to lose on Friday, I would be legitimately stunned), but maybe there’s another movie that sneaks ahead in the final calculus. Something Sundance-y like “Summer of Soul” or “Flee,” or Cannes-y like “Titane” or “The Worst Person in the World,” or even New York-y like “Shiva Baby” or… “West Side Story”? It might not be that far-fetched. After all, “American Hustle” took top honors from the NYFCC back in 2013 and while the voting body has changed some in the eight years since that surprising choice, it does at least present the possibility that a major mainstream release screened late could swoop in as the consensus pick. But before I go, I want to flag one other Best Actor pick on which to keep a watchful eye: Nicolas Cage, whose performance in “Pig” has wowed critics — especially NYFCC members. I would be shocked if he exited the December critics’ groups run without at least one major honor.

joyceeng: The recency bias was hella strong with that “American Hustle” win. Is this you planting your flag for Nic to win one of the Big Three? That is definitely not impossible. He’s also a past winner and it’s been a while since they’ve had a repeat champ in that category (DDL won his fourth one for “Lincoln”). And you’re right — they tend to spread the wealth, and recently it’s been hard for a film to win more than two awards with them unless you’re “Carol” or Alfonso Cuaron DP’ing your own movie. So, yes, we could have a third straight year of a BP/BD split here. One thing you can probably bet on is that whatever wins Best Picture here likely won’t win with our West Coast pals since they’ve only matched three times since 2010. #neverforget LA giving it to “Small Axe” last year.