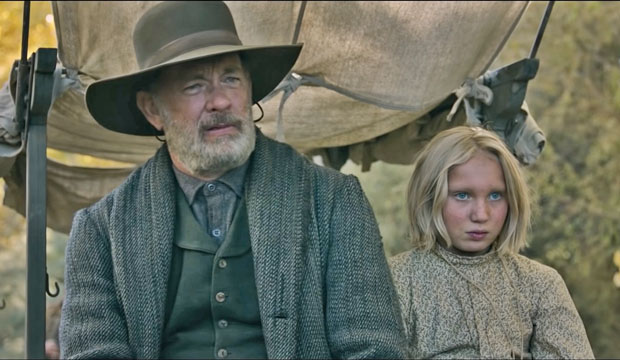 There are horror stories chronicling the difficulties trying to cast a film. Practically every actress of a certain age in Hollywood auditioned for the pivotal role of Scarlett O’Hara in 1939’s “Gone with the Wind” before producer David O. Selznick selected the British actress Vivien Leigh. And more recently, Sacha Baron Cohen went on an exhaustive search for the perfect actress to play his teenage daughter Tutar in “Borat: Subsequent Moviefilm” before he found Bulgarian actress Maria Bakalova.

Oscar-nominated filmmaker Paul Greengrass (2005’s “Flight 93”) knew his biggest problem with his new film, Universal’s “News of the World,” was finding a child actress to play Johanna, a German émigré in Texas in 1870 who had been kidnapped by the Kiowa as a child. Not only did he need a young German actress, Greengrass needed one strong enough to hold her own opposite the film’s star Tom Hanks, who plays Captain Jason Kidd, a Civil War veteran who travels from town to town in Texas reading the news from the papers of the day. One day, he comes across Johanna whose Native American parents had been killed by U.S. soldiers. At a Union checkpoint, Kidd is told he must return Johanna to her relatives. Enter Helena Zengel.

In a recent Zoom conversation moderated by veteran film critic Thelma Adams, Greengrass and Zengel, the director discussed how he cast the now 12-year-old, who has been nominated at both the Golden Globes and Screen Actors Guild Awards.

It was Gail Mutrux, one of the producers of the Universal release, who recommended Zengel to Greengrass sending him the 2019 German drama “System Crasher,” for which Zengel won the German Film Award for Best Actress as the anti-social near-feral child. “She sent me the link and I watched it that night” said Greengrass. “I thought it was brilliant and Helena was superb in it- with huge range, too. I had a strong sense then, literally, as I watched it. I thought, ‘Well, I mean, it’s going to have to be her. She’s the perfect age. She looks exactly right.” A week later, Zengel and her mother came to London to meet Greengrass. “We chatted a few hours and I thought, ‘She’s perfect.” ‘

Her mother even filled in for Hanks when Greengrass had to do the scene when Johanna bites Kidd and screams. “That was funny with the biting scene,” piped in Zengel. “That was hilarious,” Greengrass said. “You were so good in that audition. I remember we sat down, and I said to you ‘You like acting, don’t you? And you said ‘Oh, I love acting. It’s my favorite thing in the whole world.’”

“It was the easiest casting decision,” Greengrass said. “When we turned up on the first day, you do have nerves. If you’re in my position you have nerves because you think, well, she’s 11. How is it going to be?”’ The first day of shooting happened to be the scene where Kidd first finds Johanna in the woods. “I remember Tom came up to me after a couple of takes,” said Greengrass, who had worked with the two-time Oscar-winner in 2013’s “Captain Phillips.” “He is there next to me and said, ‘She is absolutely superb.’ I never worried again. The two of them bonded and off they went. She was fantastic from the first to the last.”

“The Searchers”-esque Western, which Universal opened theatrically on Christmas, has earned $5.4 million-and heads to VOD on Jan 15, is currently rated 85% fresh on Rotten Tomatoes with reviewers praising the work of its two stars. The Wall Street Journal’s Joe Morgenstern stated: “Hanks gets the best lines in ‘News of the World’…. He does them justice as always, but his co-star, an extraordinary 12-year-old named Helena Zengel, gets the best silences. They give the film its dimension of mystery.”

Zengel noted the journey between Johanna and Kidd is “really intense and emotional” because Johanna initially doesn’t like or trust Kidd. “She’s actually kind of afraid of the white people because they killed her Native American parents. But I think it’s a very heartbreaking story of them getting together and actually being humans together who are searching for love and hope and also home. Then they find each other and go on this journey together.”

Before production began, Zengel began learning the Kiowa language and culture from her teacher Laurel. “I learned a lot about how they lived and how I should act,” she explained. She also learned a lot from Hanks during the production. “There are many advices he gave me, or I may have given him,” said Zengel.  “I think you just learn being together. I think every day was a new day.” Hanks was very “kind” to her in the scene where Johanna and Kidd cry. “He was literally crying in every scene even if the shot wasn’t on him. Even when it was my closeup, he cried in every scene, so I could get emotional.”