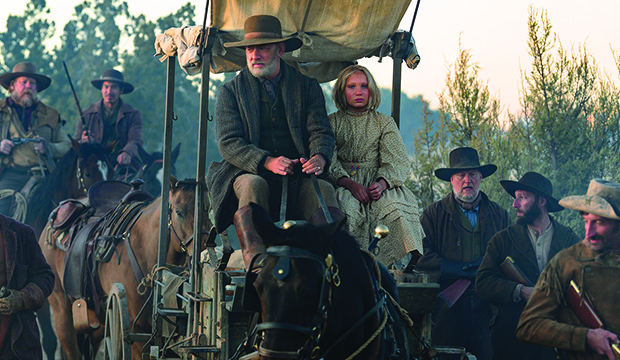 In his Best Supporting Actor Oscar speech for “Bridge of Spies” (2015), Mark Rylance quoted his signature line in the film to give a shout-out to Tom Hanks. “I think if you ever wondered about acting with Tom Hanks, ‘Would it help?’, the answer’s clearly yes,” Rylance quipped, holding up his new statuette to the camera.

Rylance is not the only person Hanks, America’s Dad, has helped get some Oscar love. While Hanks had a 19-year nomination drought with the academy, broken last year with his supporting actor bid for “A Beautiful Day in the Neighborhood,” many of his supporting co-stars over the past three decades have gotten the patented Tom Hanks Bump, scoring Oscar nominations without him shortlisted in Best Actor. And now his “News of the World” co-star Helena Zengel looks on course to do the same.

They’re not exactly coattail nominations (go to Daniel Day-Lewis for those) since Hanks himself was not nominated, but it’s like people come for Hanks and stay for his co-stars, some of whom, like Zengel, delivered breakthrough performances. Here are the supporting players to earn Oscar nominations while the two-time champ was snubbed in lead.

Meryl Streep also earned an nomination without Hanks, but it was in lead, for “The Post” (2017), and she doesn’t need the Tom Hanks Bump since, you know, she’s Meryl Streep, 21-time Oscar nominee with nine nominations and a win during his nearly two-decade dry spell.

From the aforementioned list, Rylance is the only one who won. The closest Hanks came to a nomination was for “Captain Phillips,” for which he hit every precursor but was one of the shocking snubs as Christian Bale (“American Hustle”) displaced him from the expected Best Actor five.

But despite being a good luck charm for his co-stars, Hanks did not carry coattail nominees for five of his six nominations; he was the sole acting nominee for “Big” (1988), “Philadelphia” (1993), “Saving Private Ryan” (1998), “Cast Away” (2000) and “A Beautiful Day in the Neighborhood.” The exception was “Forrest Gump” (1994), for which Gary Sinise was nominated in supporting actor. To be fair, “Cast Away” was a one-man show, unless we were going to nominate a volleyball, but his other “Forrest Gump” co-stars, Sally Field and Robin Wright, were snubbed after Screen Actors Guild Awards nominations for both and a Golden Globe bid for the latter. Meanwhile, Denzel Washington opted to campaign in Best Actor with Hanks for “Philadelphia,” which obviously didn’t work out for him.

Zengel would be the first child actor to join this group. The 12-year-old, who holds her own sharing the screen with Hanks for the majority of “News of the World,” has earned Golden Globe and Screen Actors Guild nominations for Best Supporting Actress and was longlisted by BAFTA, putting her in solid position to be the first minor to be nominated in the Oscars’ corresponding category since Hailee Steinfeld for “True Grit” 10 years ago. She’s currently in seventh place in the odds behind Olivia Colman (“The Father”), Amanda Seyfried (“Mank”), Youn Yuh-jung (“Minari”), Glenn Close (“Hillbilly Elegy”), Maria Bakalova (“Borat Subsequent Moviefilm”) and Ellen Burstyn (“Pieces of a Woman”).

Like many of the previous cases, Hanks, reliable as always in the Western, hasn’t been able to get much awards traction this season. Besides making the BAFTA longlist, he just has a Best Actor bid — in a field of eight — from the Critics Choice Awards, which, ironically, snubbed Zengel in supporting but nominated her for young actor/actress. With the Oscars’ Best Actor top four looking strong and the final spot appearing to be a battle between Steven Yeun (“Minari”) and Delroy Lindo (“Da 5 Bloods”), Hanks, who’s in ninth place in the odds, seems like a long shot.

But if Zengel makes it in, we’re sure he’ll be happy to have helped once again.