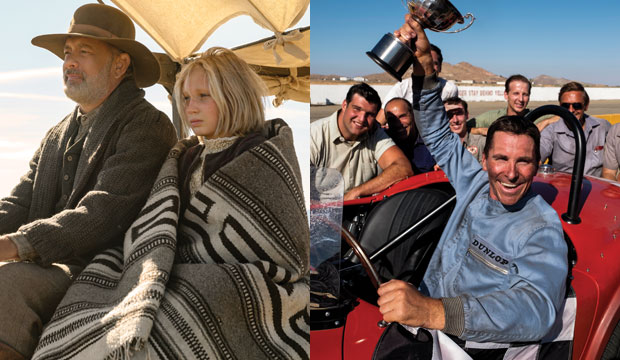 Are we underestimating “News of the World” at the Oscars? As of this writing it ranks among the top 10 likely nominees for Best Picture, according to the combined predictions of thousands of Gold Derby users. But it’s an underdog in other top categories. Could it do even better than we’re giving it credit for? It’s reminiscent of last year’s Best Picture nominee “Ford v Ferrari,” and there’s reason to believe this film might do even better.

“News of the World” and “Ford v Ferrari” are quite different movies on the surface. “News” is a Western starring Tom Hanks as a former Confederate soldier trying to escort an orphaned girl (Helena Zengel) back to her family. “Ford” was a sports movie starring Christian Bale and Matt Damon as a driver and engineer trying to win a prestigious auto race. But the two films have similar appeal.

They were both dad movies: old-fashioned heroic stories that hearken back to a bygone era of moviemaking and might appeal to the kind of older male demographic that still makes up so much of the motion picture academy. We’ve seen a number of movies in that vein earn Best Picture nominations and even wins in recent years.

“News of the World” also has a strong pedigree that might help it over the line. In addition to double Oscar champ Hanks in the leading role, it’s helmed by Paul Greengrass, who previously earned a Best Director bid for “United 93” (2006), followed by a Best Picture bid for his film “Captain Phillips” (2013), the latter of which also starred Hanks.

SEECan Tom Hanks (‘News of the World’) earn his 7th Oscar nomination and first for Best Actor in nearly 2 decades?

It also has the kinds of high production values that could score it many nominations below the line: we’re currently predicting bids for the film’s cinematography, costumes, film editing and production design. And it’s unique in this field of contenders: in this COVID-19 pandemic year, some of the year’s most lavish, technical movies like “Dune” and “No Time to Die” were pushed out of contention , opening the door even wider for this crowd-pleaser.

Universal’s “News” also stands out in an awards field full of contenders from streamers like Netflix, Amazon and Hulu. The academy have balked at giving Best Picture Oscars to streaming titles thus far, so if voters are still skittish about this changing industry landscape, “News” could be good news for them, especially after Universal managed a similar Best Picture coup with the dad-friendly road movie “Green Book” over “Roma” (2018).