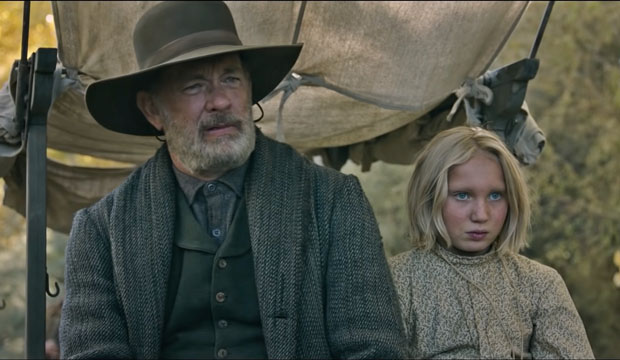 Universal Pictures (the studio that gave us the 2019 Best Picture winner “Green Book”) has another red-hot Oscar contender on its hands with “News of the World.” Tom Hanks stars in this period western written and directed by Paul Greengrass. The pair previously collaborated on the 2014 Best Picture nominee, “Captain Phillips.”

Among the three dozen top critics surveyed by Rotten Tomatoes, “News of the World” merits a score of 88 based on their rave reviews. Audiences do it one better, giving it a score of 89. That tally is based on ratings by more than 1,250 people who paid to watch the picture. It has numbered in the top 5 at the box office since being released on Christmas Day. With the pandemic shuttering many theaters nationwide, movie fans are turning to video on demand. And “News of the World” tops the most recent VOD chart put out by Fandango (bumping Universal’s animated entry “The Croods: A New Age”).

“News of the World” is set five years after the Civil War. Hanks is Captain Jefferson Kyle Kidd, an itinerant war veteran who makes his living as a storyteller. Travelling through Texas he crosses paths with Johana (Helena Zengel), an orphan raised by the Kiowa people as one of their own. He agrees to return the girl to her relatives hundreds of miles away. Joining Hanks and newcomer Zengel in the large ensemble cast is Academy Award nominee and Emmy winner Mare Winningham.