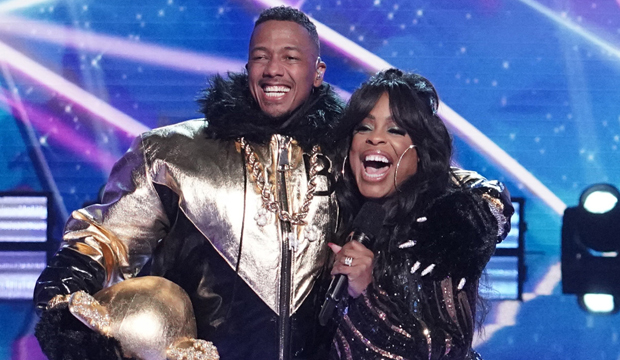 Guest host Niecy Nash dropped a bombshell on “The Masked Singer” Wednesday night when she announced that she alone would decide which singer in the Group B finals would be unmasked. Shocking panelists Robin Thicke, Jenny McCarthy, Ken Jeong and Nicole Scherzinger, Niecy eliminated the latest wild card contestant, the Bulldog. When the gold-covered pup pulled off his mask, he revealed himself to be none other than comedian, rapper and host with the most, Nick Cannon!

“I dedicated my whole performance to you and you’re gonna kick me off?” Nick joked during his unmasked interview with his temporary replacement. “Niecy, first and foremost, let me say I dedicated my performance to you because you truly are a queen. And you stepping in for me during my sickness and during a hard time for me, and being able to watch you do your thing amazingly and shine here. I truly do thank you.”

SEECrab evacuates ‘The Masked Singer’ stage after nearly passing out in costume: ‘I can’t breathe’

Nick was sidelined throughout the first four episodes of Season 5 with Covid-19, so Niecy stepped in while he recovered. It’s no surprise that the known prankster chose to make his comeback as a fake wildcard contestant, throwing his voice while singing “Candy Girl” for the audience. Before his big reveal, the panel had guessed the Bulldog may have been Chris Tucker, Andy Samberg or Chris Rock.

Although crew members behind the scenes likely knew that Nick would be unmasked after his first performance, they went all out in making his clue package look as authentic as possible. There was a “GT” in Bulldog’s package, a clue to Nick hosting AGT, “America’s Got Talent.” The dance battle in Bulldog’s package nods to Nick’s roles in dance films like “Drumline,” “Shall We Dance” and “School Dance.”

“I have a newfound respect for all of our masked crusaders from Season 1 to all of these people right here on this stage,” Nick admitted before singing his encore performance. “I never thought I would be nervous. My heart was beating fast and stuff! Yo, I’m nervous to perform in front of my people!”

Nick will return to host “The Masked Singer” next week for the Group A finals. Closing out the show, Niecy bid farewell. “I have to say, it has been an absolute pleasure being a part of this family,” the Emmy-nominated actress said as she waved goodbye. Nick is technically the fifth singer unmasked this season, preceded by  Kermit the Frog as the Snail, Caitlyn Jenner as the Phoenix, Danny Trejo as the Raccoon and Logan Paul as Grandpa Monster.

'American Idol' recap: Which 'Comeback' contestant will get the last spot in the Top 10? [UPDATING LIVE…