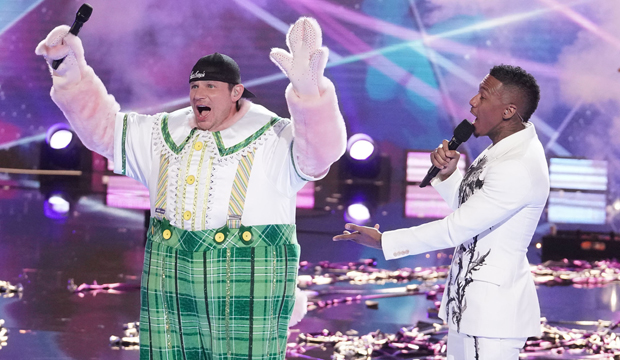 A champion was crowned on Wednesday night’s Season 5 finale of “The Masked Singer.” The Piglet reigned supreme and took home the Golden Mask trophy after belting out a passionate rendition of “Faithfully” by Journey. When it came time to unmask the winner, 98 Degrees’ Nick Lachey was revealed as the talented farm animal. The Black Swan (Grammy winner JoJo) placed second and the Chameleon (rapper Wiz Khalifa) finished in third.

“I miss performing,” Nick told host Nick Cannon during his unmasked interview. “And that’s what this experience has done for me is remind me how much I love singing. How much I love music. I’ve had the best time going on this twisted, weird ride that is ‘The Masked Singer.’ My kids wanted me to do the show for so long. Daddy’s coming home with a little hardware!”

Nobody was more thrilled to see Nick emerge from the Piglet costume than panelist Jenny McCarthy. The queen of first impression guesses edged out Ken Jeong for her second Golden Ear trophy after correctly naming the boy band member upon hearing him on Episode 2. Ken thought the Piglet was actor Jeremy Renner while Nicole Scherzinger guessed Backstreet Boy Brian Littrell. Robin Thicke correctly named Nick by finale night, but his first impression guess of John Rzeznik earned him no points.

Throughout the season multiple clue packages were dropping hints about the Piglet’s true identity. The “1DR” prize ribbon in Piglet’s package was a clue to Nick’s famous collaboration with Stevie Wonder. Piglet’s dating show package was a nod to Nick’s hosting the popular dating show, “Love is Blind.” Cluedle-Doo’s Dan Marino clue was a nod to the celebrity football game Nick played in alongside the NFL superstar. The suit of armor in Piglet’s package was a clue to the hit song by 98 Degrees, “Give Me Just One Night.”

With his victory, Nick joins a prestigious group of winners from “The Masked Singer.” T-Pain won the inaugural season as Monster. TV host Wayne Brady took home the top prize in Season 2 as the Fox. Songwriter and “Real Housewives” star Kandi Burruss won the Golden Mask trophy in Season 3 and country superstar LeAnn Rimes was victorious in Season 4.