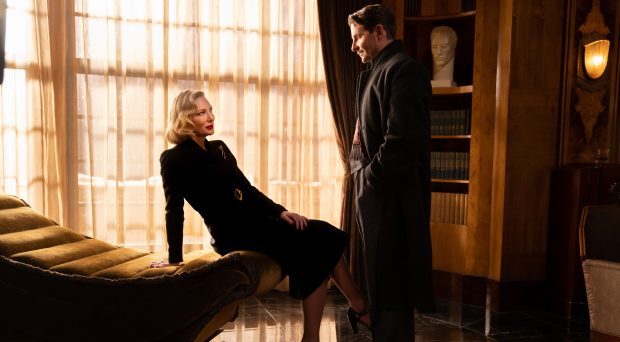 When audiences last saw a feature film from acclaimed director Guillermo Del Toro it was “The Shape of Water,” a surprising Oscars heavyweight that won Best Picture and scored Del Toro Best Director honors at the 2018 Academy Awards. So expectations for Del Toro’s follow-up, a fresh adaptation of William Lindsay Gresham’s 1946 noir novel “Nightmare Alley” (which was previously turned into a 1947 noir feature film), were sky-high heading into Wednesday night’s screenings in New York and Los Angeles. Based on early responses from journalists and pundits, Del Toro did not disappoint — though whether academy members will warm to the film’s cold-hearted story and characters is another conversation entirely.

“The movie itself lands as a rock-solid, potentially across-the-board player, bolstered by impeccable craft below the line and a superb ensemble in top form,” Vanity Fair awards writer David Canfield wrote. “It’s a darker movie than ‘Shape of Water,’ though, and one that feels relatively conventional by modern standards, with a classic kind of antihero wading through a murky, suspensefully engineered tale of ambition and deceit. It’s hard to see this one stirring enough passion to go all the way.”

Speculated Variety film awards editor Clayton Davis, “There are two movies within Searchlight Pictures’ ‘Nightmare Alley.’ One makes eight-time nominee Bradley Cooper a long-overdue Oscar winner. The other would add another statue to the shelf of visionary director Guillermo del Toro. Depending on which one entices an Academy voter, they could fall for one, both or neither of the options. The darkly complex and gruesome outing may prove to be more difficult for some conservative movie-goers to take in. At a minimum, the race for best production design may have just ended tonight.”

Featuring an all-star cast led by Bradley Cooper, “Nightmare Alley” focuses on a young man named Stanton Carlisle (Cooper), who ends up working alongside like-minded washouts at a carnival following a personal tragedy. There, Stanton becomes enamored with an alcoholic mentalist (David Strathairn) and his “psychic” wife (Toni Collette), and falls for a fellow lost soul in Molly (Rooney Mara), a woman who appears to withstand high-volts of electricity. Later, the film shifts ahead a couple of years to find Stanton and Molly thriving as mentalist con artists in Buffalo, when they come across a mysterious psychologist (Cate Blanchett) and a wealthy mark with a secret (Richard Jenkins).

“Cooper has one of his best roles here, not an easy one to play of this broken man who can’t seem to redeem himself, but he does exceptionally well, bringing far more depth and risk-taking than [original star] Tyrone Power was allowed to display,” Pete Hammond wrote of the film for Deadline.

“‘Nightmare Alley’ is all-round brilliance,” wrote Variety senior artisans editor Jazz Tangcay. “The performances are a spectacle with Bradley Cooper delivering one of the best of the year.”

But despite the praise for Cooper, it’s perhaps Blanchett who stood tallest in the early reviews and responses posted on Wednesday evening. “Blanchett, who is particularly fantastic, likely stands the best chance [at a nomination],” suggested Canfield.

“Nightmare Alley” is out in theaters on December 17. Check out more reactions to the film below.

Bradley Cooper will likely earn his fifth Oscar nomination for acting for #NightmareAlley.

Guillermo del Toro’s #NightmareAlley is haunting & seductive in the way it draws you into its story about a man lost in his own long con. Steadily unsettling & wildly gripping by the end – the scenes between Bradley Cooper & Cate Blanchett are fantastic. Deliciously old fashioned pic.twitter.com/pcyYSGZX3U