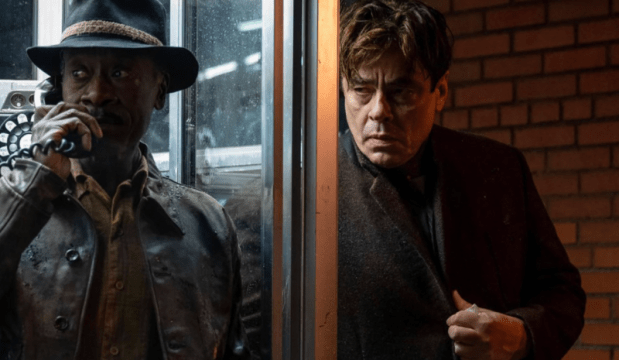 Oscar-winning  filmmaker Steven Soderbergh is no stranger to heist movies. Remember 1998’s “Out of Sight,” 2001’s “Ocean’s Eleven” and 2017’s “Logan Lucky”? And he’s returned to the popular genre with this latest film “No Sudden Move,” which landed on HBO Max July 1 after having premiered at the Tribeca Film Festival.

Set in Detroit in 1954, “No Sudden Move” around a group of small-time hoods who are hired to steal a document. Though they consider it to be a straightforward job, it turns out to be anything but when the gig goes wrong. While the crooks try to figure out who hired them and way, they are lead down a rabbit hole of twists and turns involving racial prejudice, corporate greed in the auto industry and even the mob. “No Sudden Move,” which stars Don Cheadle, Benicio del Toro, David Harbour, Jon Hamm, Brendan Fraser, and Ray Liotta, is currently at 87% fresh on Rotten Tomatoes with the Los Angeles Times’ Justin Chang noting the film “is a ride that feels smooth and bumpy in all the right places.”

It seems apropos that “No Sudden Move” is set during the 1950s because some of the best and most influential heist movies were produced during the decade. Here are five of the best.

“The Asphalt Jungle” (1950)
Crackerjack John Huston flick film noir heist flick based on W.R. Burnett’s novel. And crime doesn’t pay for the crooked denizens of an unnamed Midwestern city after a veteran criminal mastermind Erwin “Doc” Riedenschneider (an Oscar-nominated Sam Jaffe) is released from prison with a perfect plan for a jewelry heist. He tells a crooked lawyer (Louis Calhern) about his plan and that he needs $50,000 to hire three men-a safecracker (Anthony Caruso), a driver (James Whitmore) and the muscle (Sterling Hayden). Of course, it doesn’t end well for anyone.

“Asphalt Jungle,” which features Marilyn Monroe as Calhern’s mistress, was nominated for four Oscars-supporting actor, director, screenplay and cinematographer. Reviews were also strong with the New York Times stating: “Louis Calhern as the big lawyer who tries to pull a double cross and muffs it is exceptionally fluid and adroit and Sterling Hayden is sure-fire as a brazen hoodlum who just wants to go back home. Likewise, Sam Jaffe does wonders as a cool-headed mastermind, James Whitmore is taut as a small ‘fixer’ and John McIntire is crisp as a chief of police.”

“The Killing” (1956)
Beefcake Sterling Hayden also stars in Stanley Kubrick’s early noir masterpiece. This time around, he plays an ex-con who hopes to make one last score before he retires. And he thinks he’s come up with a flawless crime-to rob a racetrack during a race. Though the thieves in “Asphalt Jungle” are all professional, Hayden’s Johnny Clay has surrounded himself with men who are desperate including a milquetoast track cashier (Elisha Cook Jr.), paranoid that his money-grubbing wife (a scene-stealing Marie Windsor) is seeing other men. Of course, she is.

Kubrick once said of the genre: “In a crime film, it is almost like a bullfight; it has a ritual and a pattern which lays down that the criminal is not going to make it, so that, you can suspend your knowledge of this for a while, sitting back in your mind in this little awareness knows and prepares you for the fact that he is not going to succeed. That type of ending is easier to accept.”

“Five Against the House” (1955)
Phil Karlson, one of the best of the “B” noir directors, helmed this low-budget crime film set mainly in Reno, Nevada and revolving around four friends, Korean War vets, now attending college in Arizona. After they travel to Reno to gamble and socialize at a casino, they witness an attempted robbery. When they return to school, one of the pals (Kerwin Matthews) comes up with a plan for them to return to the casino to rob it. The film also stars Guy Madison, a very young Kim Novak, Alvy Moore and Brian Keith as a vet suffering from extreme PTSD who becomes increasingly violent. Martin Scorsese supposedly was influenced by “Five Against the House” for this 1995 film “Casino.”

PREDICT the Emmy nominees until July 13.

“Rififi” (1955)
Jules Dassin’s French noir thriller really set the gold standard for heist films. Dassin had directed such solid crime films as 1947’s “Brute Force,” 1948’s “The Naked City” and 1950’s “Night and the City” but fled to Europe because of the Hollywood blacklist. “Rififi” is the first film he was able to direct since “Night and the City.” Based on Auguste LeBreton’s poorly received novel of the same name, “Rififi” revolves around four men attempting the near impossible-stealing jewels from a hoity-toity Paris jewelry shop. The highlight of the film is the breathtaking 30-minute heist sequence that takes place in near silence.

Because the budget was low, Dassin couldn’t hire the top French actors of the day. In fact, he hired himself to play one of the thieves—he used the name Perlo Vita in the credits. “I cast a really wonderful Italian actor and then I call him to say we will start next week, and he said ‘No, not me. I never got a contract,”” he told me in a 2004 L.A. Times interview. “I had to put on the mustache and take his pat.” Hang-dog Jean Servais was cast as the mastermind. He had been in a career slump until Dassin took a chance on him. “He was a juvenile young man in movies and then he had some problems. I saw him in a restaurant, and I said, who is that? “They said Jean Servais’ and I said, ‘That’s the guy.’ Just the way he looked.”

“Rififi” was a huge hit at the Cannes Film Festival with Dassin receiving best director. When it was released in the U.S. the following year, the New York Times’ Bosley Crowther was effusive in his praising stating that it was “perhaps the keenest crime film that ever came from France.”

“Odds Against Tomorrow” (1959)
Robert Wise directed this acclaimed crime film that stars Robert Ryan, Harry Belafonte (whose company produced the film). The screenplay was penned by Abraham Polonsky, who had to use a front because he was blacklisted, and Nelson Gidding. John Lewis supplied the pulsating jazz score. Begley plays former cop who was kicked off the force because he wouldn’t cooperate with crime investigators from New York. He’s decided to rob a small bank in upstate New York. So, he hires a racist, ruthless ex-con (Ryan) and a handsome, sophisticated nightclub performer (Belafonte) who is in deep debt to the bad guys, to help him pull off the job. Both men initially turn down the job but eventually agree to do it because they are so desperate for the $50,000 a piece promised them. Besides being a heist movie, “Odds Against Tomorrow’ doesn’t pull any punches exploring racial prejudice. So much so, it was nominated for a Golden Globe for Motion Picture Promoting International Understanding.

Emmy Experts Typing: Can 'Only Murders in the Building' make a killing?