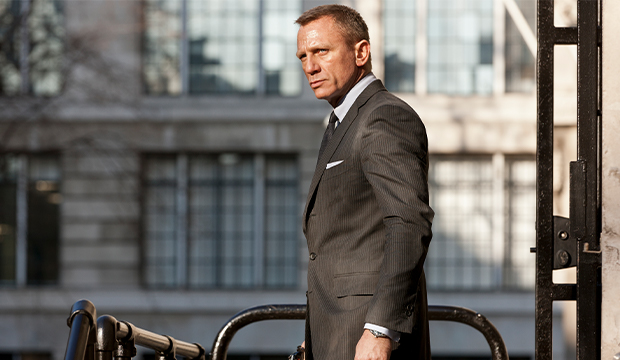 Daniel Craig has played James Bond long enough that the MI6 agent has battled supervillains and ne’er-do-wells across four presidential administrations. But all good things must come to an end, and so the long-delayed “No Time to Die” is officially Craig’s swan song in the 007 role, coming 15 years after he first picked up the superagent’s moniker.

“The Craig-starring saga has played by its own rules from the start,” David Ehlrich wrote in his review of “No Time to Die” for Indiewire, noting the film tells “a story about the need to leave certain things behind.”

“It’s the modern spy movie equivalent of ‘The Last Jedi,’ as the universe tells James Bond that he has no choice but to let the past die — to kill it if he has to — and dares Craig to pull the trigger,” Ehrlich wrote. “The actor barely even blinks. Instead, he limps, smirks, and shoots his way through five erratic movies’ worth of pent-up emotion in order to make you cry. The result might be the least exciting Bond film of the 21st century, but it’s undeniably also the most moving.”

Critics weighed in on “No Time to Die” on Tuesday night, just days before its international bow. (The Bond finale is in U.S. theaters starting on October 8.) The consensus is strong: while the Cary Jojo Fukunaga film is lengthy (clocking in at two hours and 43 minutes), most reviewers found it to be a satisfying send-off for Craig and Bond, especially after the disappointing “Spectre” in 2015.

“No Time to Die” “isn’t the best Bond movie. Yet it may be the greatest,” Stephanie Zacharek wrote for TIME. “At two hours and 43 minutes, it’s too long and too overstuffed with plot—more isn’t always better. And it features one of the dullest villains in the series’ history, played by Rami Malek in mottled skin and dumb silky PJs. But forget all that. ‘No Time to Die,’ its flaws notwithstanding, is perfectly tailored to the actor who is, to me, the best Bond of all. With his fifth movie as 007, Craig is so extraordinary he leaves only scorched earth behind. There will be other Bonds for those who want them. For everyone else, there’s Craig.”

Calling it a “terrific movie,” Variety critic Owen Gleiberman wrote that while “No Time to Die” is the longest Bond ever, “it’s brisk and heady and sharp.” Fukunaga, perhaps best known for “True Detective” Season 1 and “Beasts of No Nation,” Gleiberman added, “keeps the elements in balance like an ace juggler. He gets the details right — the split-second leaping-off-the-balcony action scenes, the menace of an assassin with a vagrant mechanical eyeball, the persnickety droll fun of Ben Whishaw’s performance as Q.”

“Anyone who has developed an attachment to the grit and gravitas, the coiled physicality and brooding demeanor that Daniel Craig has brought to the reinvigorated James Bond franchise, starting in 2006 with ‘Casino Royale,’ will feel a surge of raw feeling in the devastating closing act of his fifth and final appearance in the role in ‘No Time to Die,’” David Rooney wrote for The Hollywood Reporter.

Yet while critics are on board with “No Time to Die,” it remains to be seen whether the film can get awards traction as well. It’s not out of the realm of possibility, of course: Craig’s previous Bond films, “Skyfall” and “Spectre,” received six total Academy Award nominations and two wins, both for original song. The “No Time to Die” theme is by Billie Eilish, who would hope to make it three straight 007 performers to take home an Oscar after Adele and Sam Smith. Other technical nominations could in play as well, especially for composer Hans Zimmer (an Oscar winner who also has “Dune” as a major contender this year), cinematographer Linus Sandgren (an Oscar winner for “La La Land”), and editors Tom Cross (an Oscar winner for “Whiplash” and a nominee for “La La Land”) and Elliot Graham (an Oscar nominee for “Milk”).

“No Time to Die” is out in theaters on October 8.

Billie Eilish songs, ranked: Where does Oscar winner 'No Time to Die' rank among her 21 greatest…

Billie Eilish and Finneas O'Connell win Oscar for 'No Time to Die,' 3rd ever James Bond song to…

'This is such an honor': Billie Eilish, Finneas O'Connell ('No Time to Die') thank Gold Derby Awards…

Society of Composers and Lyricists Awards 2022 winners: Best prediction scores by our Editors and Users