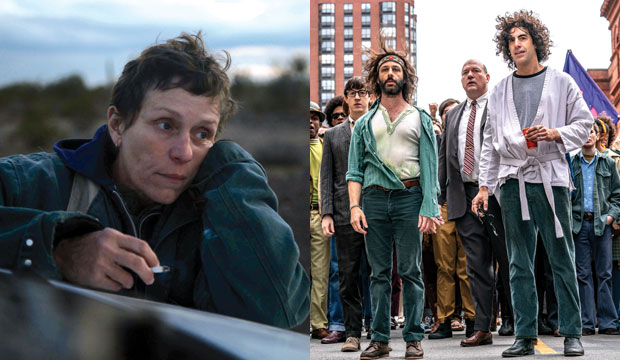 “Nomadland” will win Best Picture at the Critics Choice Awards when they’re handed out on Sunday night, March 7. That’s exactly one week after the Golden Globes, where the film also prevailed. But just how many awards will it claim, and what other films and performances will be honored by the hundreds of journalists who make up the Critics Choice Association? Scroll down for our complete predictions by film, which are based on the combined forecasts of Gold Derby users.

Chloe Zhao‘s indie drama about a woman (Frances McDormand) living out of her van as she travels the American West is tipped to win four total awards, more than we’re betting on for any other film. In addition to the top prize, Zhao is favored to take home Best Director and Best Adapted Screenplay, while Joshua James Richards is the favorite for Best Cinematography. Next in line with three victories will be “The Trial of the Chicago 7,” which is favored for Aaron Sorkin‘s original screenplay, the movie’s star-studded ensemble cast, and Alan Baumgarten‘s editing.

The two films that entered these awards with the most nominations will also take a couple home. “Mank” has a leading 12 bids, and it’s the front-runner for Trish Summerville‘s costumes and Donald Graham Burt‘s production design. “Minari” is up for 10 prizes, and it’s also favored twice: Yuh-Jung Youn for Best Supporting Actress and Best Foreign Language Film. The Golden Globes faced criticism for categorizing “Minari” as foreign despite being an American production; Critics Choice received less blowback, likely because, unlike the Globes, they also allowed the film to compete for Best Picture, where it’s also nominated.

See what other films will be honored on Sunday night. Do you agree with our forecasts? And do you think they’ll have a significant impact on the Oscar nominations?

SEEAndra Day is going nowhere but up in our Critics Choice Awards odds — will she win (or tie)?