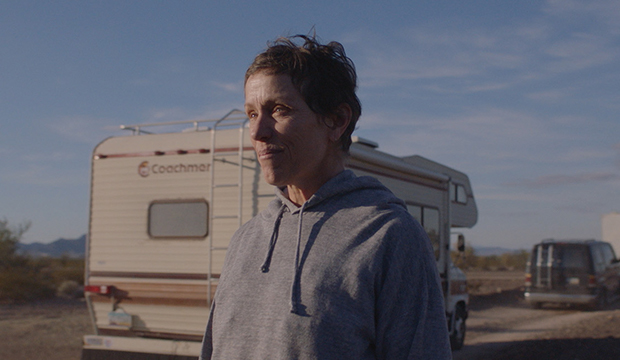 The Golden Globe Awards were held on Sunday night, February 28, almost two months later than usual due to the COVID-19 pandemic that sent shock waves through the entertainment industry. So who took home awards, who surprised, and who made history in film categories in this most unusual year, and what do they mean for the awards season ahead? Scroll down for our complete analysis of the movie winners, updated live throughout the night. And check out the complete list of Globe winners here.

The Globes are handed out by the Hollywood Foreign Press Association, a small group comprising fewer than 90 international journalists. Their members don’t overlap with the elite industry groups that decide the Oscars or BAFTAs, so they can’t tell us much about the direction the industry wants to go in, but despite their small size and unrepresentative membership, they have significant influence due to their brand recognition and the fact that they’re usually the first network TV awards broadcast of the season, giving them the platform to raise (or lower) the profiles of many films. Just look at what a boost “1917” got from upsetting at the Globes last year.

But eyes are on the Globes even more than usual not just as an Oscars bellwether but as an insular organization with controversial practices, as detailed in a recent Los Angeles Times report. The group also has no Black members, which makes it all the more conspicuous that they snubbed every single Black-led film for Best Picture, including “Ma Rainey’s Black Bottom,” “Da 5 Bloods,” “Judas and the Black Messiah” and “One Night in Miami.”

Instead, the HFPA showered nominations primarily on two Netflix dramas: “Mank” with six and “The Trial of the Chicago 7” with five. A few films followed close behind with four noms apiece: “The Father,” “Nomadland” and “Promising Young Woman.” Follow along below as each film winner is announced (times listed are Eastern).

8:09pm — BEST FILM SUPPORTING ACTOR — This wide -open field was won by Daniel Kaluuya for his performance in “Judas and the Black Messiah,” who took a minute to be heard in his acceptance speech because he was on mute — really the only way to start the Zoom Awards. He beat tough rivals Sacha Baron Cohen (“Trial of the Chicago 7”) and Leslie Odom Jr. (“One Night in Miami”), both of whom have multiple nominations this year. “Judas” only had one other nomination at these Globes (Best Original Song), but the film has been on the rise since premiering in theaters and on HBO Max on February 12. I think it could get a lot more nominations at the Oscars than it got here, and Kaluuya could win that too. Watch our interview with Kaluuya here.

9:08pm — BEST ORIGINAL SONG — Diane Warren pulls off a bit of an upset for “Io Si (Seen)” from the Italian film “The Life Ahead.” she was up against Leslie Odom (“One Night in Miami”), Andra Day (“United States vs. Billie Holiday”) and H.E.R. (“Judas and the Black Messiah”) in a category that usually loves A-list recording artists. But Warren did win once before, for “You Haven’t Seen the Last of Me” 10 years ago for “Burlesque.” Can she finally win an Oscar, though? She’s been nominated 11 times so far without winning. Watch our interview with Warren here.

9:11pm — BEST ORIGINAL SCORE — “Soul” wins its second award of the night, claiming this prize for Trent Reznor, Atticus Ross and Jon Batiste‘s composition. Reznor and Ross previously won for “The Social Network,” so between that and Sorkin’s win for “Trial of the Chicago 7,” Mark Zuckerberg is having a real resurgence tonight. Watch our interview with Reznor and Ross here.

9:31pm — BEST COMEDY/MUSICAL ACTRESS — A significant upset at Rosamund Pike wins for “I Care a Lot,” upsetting Maria Bakalova for “Borat Subsequent Moviefilm.” Bakalova was a heavy favorite since her film was nominated three times and she has won numerous critics’ prizes this season so far. But Pike’s film debuted in February and generated a lot of last-minute buzz that might have been infectious to HFPA voters. It’ll be interesting to see if she can grab that last open slot for Best Actress at the Oscars, as it seems to be anyone’s game at this point. This is Pike’s first Globe win after nominations for “Gone Girl” (2014) and “A Private War” (2018). Watch our interview with Pike here.

9:48pm — BEST FOREIGN LANGUAGE FILM — “Minari” wins in a rock-and-a-hard-place situation for the HFPA. The Globes were criticized for putting this American film from an American filmmaker (Lee Isaac Chung) in the foreign film category when previous films heavily in non-English like “Babel” have gotten to compete as dramas. This isn’t a surprising win since it seemed likely that the biggest Oscar contender in the category would prevail, though it doesn’t tell us much about the Oscar since the American film is ineligible for the academy’s Best International Feature Award. So this victory might be rather bittersweet for many fans of the film. Watch our interview with Chung here.

10:11pm — BEST FILM SUPPORTING ACTRESS — Jodie Foster pulls off a stunning upset in this category and in an awards season where Best Supporting Actress is especially up in the air. Foster won for “The Mauritanian” over a field of actors who are higher up in our Oscar odds: Olivia Colman (“The Father”), Amanda Seyfried (“Mank”), Glenn Close (“Hillbilly Elegy”) and Helena Zengel (“News of the World”). She’s not up for a SAG Award or a Critics Choice Award, but this might give her a bump in the wide-open Oscar race. Watch our interview with Foster here.

10:30pm — BEST DRAMA ACTOR — Chadwick Boseman wins posthumously for “Ma Rainey’s Black Bottom,” as most expected. It seemed a little uncertain because “Ma Rainey” didn’t get much other love from the HFPA, but the overwhelming outpouring of spport and affection for him since his death was just overwhelming. His widow Taylor Simone Ledward accepted the award on his behalf. “I don’t have his words,” she says tearfully. “Hon, you keep ’em coming.”

10:35pm — BEST FILM DIRECTOR — “Nomadland” filmmaker Chloe Zhao makes history as the first woman of color and the second woman to win this prize (Barbra Streisand was the first for “Yentl”). Zhao has been the overwhelming favorite of critics, and in a year with so much focus on the lack of representation of women behind the camera in the industry, this continues her on the path towards a historic Oscar.

10:43pm — BEST PICTURE MUSICAL/COMEDY — “Borat Subsequent Moviefilm” prevails, as most of us predicted. It seemed a little dicey there after Maria Bakalova’s surprising loss. Sacha Baron Cohen thanks the “all-white Hollywood Foreign Press” as well as breakout star Rudy Giuliani. They keep playing off winners tonight, but Cohen might have another chance at a speech if he wins Best Comedy/Musical Actor in a couple of minutes.

10:50pm — BEST COMEDY/MUSICAL ACTOR — Sacha Baron Cohen goes two-for-two after getting played off in his previous speech. This is his second win for this role after prevailing for the first “Borat” moviefilm 14 years ago. “Donald Trump is contesting the result,” Cohen jokes.

10:56pm — BEST DRAMA ACTRESS — Andra Day pulls off a major upset, winning for “The United States vs. Billie Holiday” over presumed front-runner Carey Mulligan (“Promising Young Woman”) and formidable rivals Frances McDormand (“Nomadland”), Viola Davis (“Ma Rainey’s Black Bottom”), and Vanessa Kirby (“Pieces of a Woman”). This is definitely one of the biggest surprises of the night, not least of all because this was Day’s first acting role. Could it lead to a Best Actress Oscar nomination? That seems even more possible than it already did before the night started, especially since the film just premiered on Hulu on February 26, two days before this ceremony. Watch our interview with Day here.

11:00pm — BEST PICTURE DRAMA — “Nomadland” claims the top prize to go along with its directing victory. McDormand didn’t win for her lead performance, but she’s a producer of the film so she gets a Golden Globe anyway. So does this solidify it as the Oscar front-runner? Maybe, especially since it beat “The Trial of the Chicago 7,” which was a slight favorite in our odds. But maybe not. Last year this award went to “1917,” which won multiple Oscars but ultimately not Best Picture. The last time this category’s winner won the top Oscar was “Moonlight” (2016).