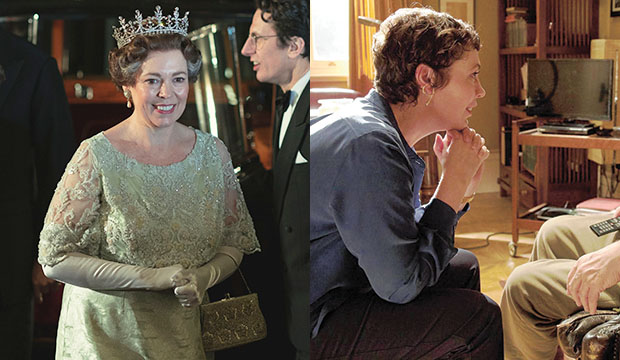 Long live the queen, but not Olivia Colman’s Golden Globes record. The three-time champ suffered her first loss(es) on Sunday night, losing Best TV Drama Actress to Emma Corrin, her co-star on “The Crown,” and Best Film Supporting Actress to Jodie Foster for “The Mauritanian.”

Most didn’t expect Colman to maintain her flawless record. She was in second place in the TV drama actress odds, behind Corrin, and in third in the film supporting actress odds, trailing Amanda Seyfried (“Mank”) and Glenn Close (“Hillbilly Elegy”), while Foster was in fourth.

Had Colman won both Globes on Sunday for a 5-for-5 record, she would’ve joined some very exclusive lists. Rosalind Russell is the only person to convert all five of her nominations, all for film, into wins: Best Actress for “Sister Kenny” (1946) and “Mourning Becomes Electra” (1947) (this was before the Globes split the race into genres), and Best Comedy/Musical Actress for “Auntie Mame” (1958), “A Majority of One” (1961) and “Gypsy” (1962).

Colman would’ve also been the latest woman to win two acting Globes in one night. Sigourney Weaver was the first to do so, triumphing in film supporting and drama actress for “Working Girl” (1988) and “Gorillas in the Mist,” the latter of which was in a three-way tie with Jodie Foster (“The Accused”) and Shirley MacLaine (“Madame Sousatzka”). Joan Plowright collected film and TV supporting Globes for “Enchanted April (1991) and “Stalin,” respectively. Helen Mirren was crowned for her royal lead performances in “The Queen” (2006) and the miniseries “Elizabeth I.” Most recently, Kate Winslet bagged her first two career Globes in film supporting actress for “The Reader” (2008) and in drama actress for “Revolutionary Road.”

Since she won TV drama actress last year for “The Crown,” a victory would’ve made Colman the first person since Claire Danes (“Homeland”) in 2012 and ’13 to win in back-to-back years. Only three other people have won the category twice (Edie Falco, Sharon Gless and Lee Remick), while Danes has prevailed three times, and Angela Lansbury holds the record with four victories.