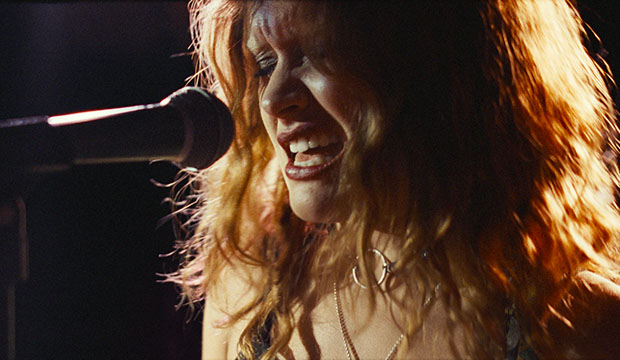 Riz Ahmed and Paul Raci are deservedly racking up wins and nominations for their respective performances in “Sound of Metal,” but their co-star Olivia Cooke has earned only a handful. While she has shown up in a few Best Supporting Actress categories from a few critics’ organizations, like the Columbus Film Critics Association and the San Diego Film Critics Society, her lack of presence at most others has led awards prognosticators to leave her out of their Oscar predictions. But in an open Best Supporting Actress field, could she be more of a contender than we expect?

It is easy to see why Ahmed’s and Raci’s performances have resonated with critics. Ahmed goes through a huge emotional journey as his character, Ruben, loses his hearing, while Raci is in a classic mentor role. Both roles are tricky in different ways, but Cooke is also remarkable in a role that could have been two-dimensional.

As Ruben’s girlfriend, Lou, she is more than just the long-suffering partner trope. Lou is devoted to taking care of Ruben, even to the point of leaving him at the sober house for the deaf because it is in his best interest. She is a heavy metal singer who is now transitioning to a new life away from Ruben. Cooke delivers a subtle performance, but it is not without its difficulties as she transforms her appearance (including bleached eyebrows) and shows that while Lou is not going through the same struggle as Ruben, it is a tumultuous experience for her nonetheless.

The Oscar race for Best Supporting Actress is an unpredictable one this year, with Oscar winners like Ellen Burstyn (“Pieces of a Woman”) and Olivia Colman (“The Father”), the heavily nominated Glenn Close (“Hillbilly Elegy”), and fresher contenders like Amanda Seyfried (“Mank”), Maria Bakalova (“Borat Subsequent Moviefilm”) and Youn Yuh-jung (“Minari”) in the mix as viable winners. Cooke is currently in the top 20 in Gold Derby’s odds.

As precursor nominations roll in, there is the possibility that some of the presumed contenders ahead of her won’t be as competitive as we expected, which could open the door for Cooke. Her chances would improve even more if “Sound of Metal’s” positive word of mouth makes it a Best Picture contender — it’s currently in 12th — and if Ahmed became the frontrunner in Best Actor, which could result in the actress going along for the “Sound of Metal” ride.