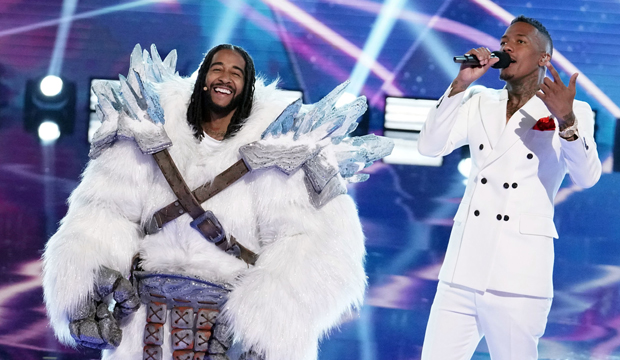 The Final 4 took the stage on Wednesday night’s semifinals of “The Masked Singer” in hopes of reaching the May 26 finale. Each of the wacky characters gave it their all, but it was Yeti who got unmasked and was forced to reveal himself as Grammy-nominated singer Omarion. His performance of  “Celebrate” by Kool & the Gang received high praise, but wasn’t enough to outshine Black Swan, Chameleon or Piglet.

“This was a new challenge,” the former B2K member told host Nick Cannon during his unmasked interview. “To continue to broaden my range as a performer. This was an amazing experience so thank you guys for all of your compliments. I truly appreciated it and I had so much fun.”

“Actually, I feel like this is the heaviest suit,” the multi-platinum singer joked. Despite the bulky costume, Omarion was praised by panelists Robin Thicke, Jenny McCarthy, Ken Jeong and Nicole Scherzinger for his dance moves throughout the season and his historic performance of “Lonely,” which he sang while rollerblading around the stage. Donnie Wahlberg, who was revealed as Cluedle-Doo earlier in the episode, added, “It takes a talent like yours to make that character come to life. It could only be done by someone with the talent that you have.”

Robin scored one point towards the Golden Ear trophy by naming Omarion as the Yeti with his first impression guess. He trails Jenny and Ken who each have two points. Nicole has yet to get on the board. Ken thought Yeti was superstar Justin Bieber, Nicole guessed R&B singer Mario and Jenny incorrectly presumed he was Grammy-winner Ne-Yo.

Next week Black Swan, Chameleon or Piglet will be crowned the Season 5 champion. 10 acts were unmasked this season prior to Omarion as the Yeti: Kermit the Frog as the Snail, Caitlyn Jenner as the Phoenix, Danny Trejo as the Raccoon, Logan Paul as Grandpa Monster, Nick Cannon as the Bulldog, Mark McGrath as the Orca, Bobby Brown as the Crab, Tamera Mowry-Housely as the Seashell, Tyrese Gibson as the Robopine and Hanson as the Russian Dolls.