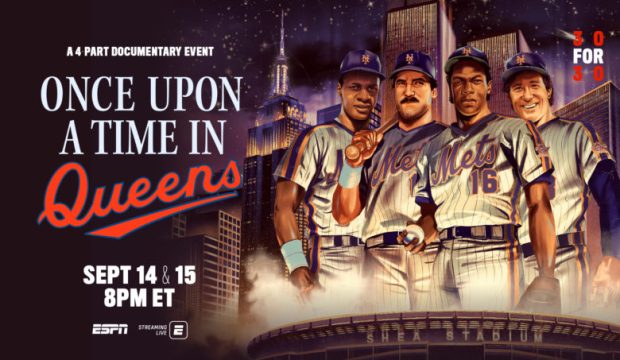 With nicknames like Doc, The Kid, Nails, Mookie, Bobby O, El Sid, The Straw Man, and Mex, it might be easy to confuse players on the 1986 World Series champion New York Mets with characters from an old 1940s war movie or Western — the kind of project Herman J. Mankiewicz might have worked on in the Golden Age of Hollywood. So perhaps it is fitting that 35 years after the iconic Mets season, a filmmaker with direct ties to the Mankiewicz brothers turned the team’s no-holds-barred title run into a documentary, ESPN’s “Once Upon a Time in Queens.”

“I just felt like, ‘Wow, this is like being with the Beatles in Hamburg,” director Nick Davis, who is the grandson of the Oscar-winning “Citizen Kane” screenwriter, tells Gold Derby. “I would like us to win more world championships, as a Mets fan, but I don’t know that we’re ever going to get that kind of team, and that kind of spirit that New York had in the ‘80s, and that that team captured so perfectly. And it just struck me always as like a perfect thing for drama, for cinema.” (Davis also wrote a book about his grandfather and his great-uncle, Joseph L. Mankiewicz, out now.)

Spread across four parts — the first two air Tuesday night on ESPN and ESPN+, with the final sections coming on Wednesday evening — “Once Upon a Time in Queens” tracks the 1986 New York Mets throughout the team’s historic season: 108 wins and the club’s second world championship title (it remains the last World Series the Mets have won). But Davis also pushes beyond the baseball diamond, contextualizing the club within 1980s New York, where sex and drugs flourished and a “greed is good” mentality ruled the zeitgeist.

“I think that when you’re telling the story, you have to provide some context,” Davis explains. The filmmaker is a lifelong Mets fan who went to numerous games in the 1980s, as the Mets began their ascent to 1986.

“For me, having lived through it, I really wanted people to feel what I felt when I was going to Shea Stadium [where the Mets played until 2008] in August of 1985,” he recalls. “I remember being at a game in August of ’85, and my whole life as a Met fan, I had always had a thing about ‘The Boys of Summer,’ the book about the 1950s, the great Brooklyn Dodger teams in the 1950s who finally won in ‘55. And I felt like, ‘Ah, what must it have felt like, as that team was playing?’ There are all these legendary players, and — more than just players — really interesting personalities. And in ’85, when you had Carter, Gooden, Hernandez, and Strawberry all on one team, surrounded by this supporting cast, that only got better in ‘86, I remember being at a game and feeling like this is it. It’s happening. This is what I’ve always waited for, and what I’ve always wanted. And remember this, because it’s not going to happen again.”

The 1986 Mets dominated the tabloids, getting into numerous fights on the field and partying until all hours after the games. The team’s salacious antics — which included wide drug use and ugly misogyny — have been documented in the years since the World Series win, perhaps most famously in the Jeff Pearlman book “The Bad Guys Won.” The title was possibly too kind: In one oft-repeated and long denied anecdote about the team, Mets player Kevin Mitchell was accused of decapitating his girlfriend’s cat. (It’s a charge Mitchell has frequently said wasn’t true.)

As a result, Davis says some players were nervous “Once Upon a Time in Queens” would turn into a rehashed hit piece. “The other night we did this panel, and [former pitcher] Bobby Ojeda admitted that he [had some trepidation about participating in the film]. He was like, ‘Not this again.’ And I think to some extent, because of the world we live in, in this clickbait world, I think that some of them did feel like, ‘Oh, not this again.’ … And once they understood that, no, no, no, that’ll be part of it, but this is a whole sweeping cinematic tale, and I want your participation to tell your part of it, then they all kind of happily got on board.”

He adds, “The other thing is, I think now they’re all old enough, and enough years have gone by, that I think they’re less worried about their own reputation. So they’re willing to kind of be honest and let it all hang out, and tell stories that maybe they’ve been ashamed of in the past. And now they’re able to sort of contextualize it themselves and say like, ‘Look, this is what we were doing. It’s not the greatest thing in the world, but what are we going to do? I’m in my late 50s, early 60s and I got nothing to hide.’ Thirty-five years later is kind of the perfect time to get these guys.”

“Once Upon a Time in Queens” is part of ESPN’s 30 for 30 series and is executive produced by ABC late-night host Jimmy Kimmel, a longtime Mets fan. Among the celebrities who make an appearance in the film include “Game of Thrones” author George R.R. Martin, “The Mandalorian” star Bill Burr, Public Enemy rapper Chuck D, and Oscar-winning filmmaker Oliver Stone. The project comes on the heels of not just the Emmy Award-winning ESPN sports documentary series but the network’s blockbuster hit “The Last Dance,” an Emmy winner last year. That multi-part series captured viewers’ attention not just because it provided sports fans with an inside look at Michael Jordan’s final season with the Chicago Bulls, but also for the way it humanized one of the most recognizable public figures of the modern era. Davis says that was his goal for “Once Upon a Time in Queens” as well.

“Of course I want Mets fans to like it, and to love it and cherish it, but I really want non-sports fans, non-baseball fans, or people who didn’t like the Mets then, or didn’t care about the Mets then, to be able to watch this, and watch this story about these different characters who came together, and all different backgrounds, and put their differences aside in pursuit of a goal that was larger than any of them,” Davis says. “That’s very relatable and very human, and has nothing to do with sports.”