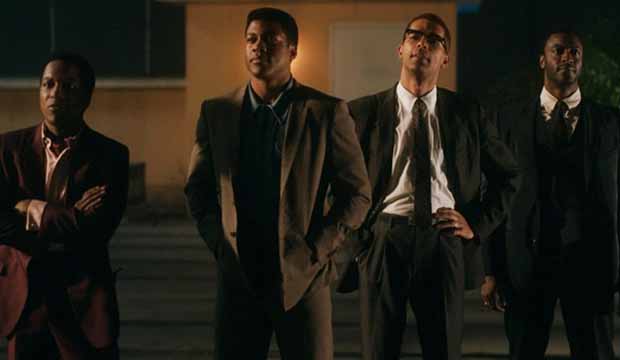 It feels like ages ago when Regina King’s “One Night in Miami” made history at the Venice Film Festival last summer, but the awards contender finally makes its consumer debut Friday on Amazon Prime Video buoyed by what has become a consistent drumbeat of support.

It’s easy to imagine a scenario where that becomes a reality, even in a crowded and uncertain Best Picture race where a number of movies — including “Nomadland,” “The Trial of the Chicago 7,” “News of the World,” and “Ma Rainey’s Black Bottom” — have all generated passionate support thus far. Look no further than “Argo” for a recent example. Like that Best Picture winner, “One Night in Miami” is an ensemble period piece directed by an actor with deep industry ties (and a previous Oscar win) and about the power and importance of Hollywood imagery itself. A central debate in “One Night in Miami” is about the responsibility Black artists and stars have to use their platform to promote civil rights and social change.

Beyond Best Picture, however, “One Night in Miami” is tapped to compete in a number of major categories. King has remained a consistent presence in the Best Director race, with 21 Experts predicting she’ll receive what would be a historic nomination. (King would become the first Black woman ever nominated in the Best Director category.) Elsewhere, Odom is an overwhelming favorite to not only receive a nomination for Best Supporting Actor but also win the award itself: 18 Experts have the former “Hamilton” star taking home the gold statuette.

Thus far, Odom has been the only actor in the highly praised ensemble to break out from the pack — but there remains nascent buzz on Ben-Adir in the Best Actor race. He currently sits in eighth place in the Gold Derby odds, just behind Tom Hanks for “News of the World.”

“One Night in Miami” is based on the Olivier Award-nominated play of the same name by Kemp Powers, who adapted his own stage show for the film’s script. Powers, also a contender in the Best Original Screenplay category for “Soul,” is a major force in the Best Adapted Screenplay race with 19/5 odds and 27 Experts predicting he’ll land a nomination.

Assuming those nominations materialize, “One Night in Miami” would compete in four of the top-eight categories. According to the Experts, “One Night in Miami” faces a tougher road in the below-the-line races — although editor Tariq Anwar (a nominee previously for “American Beauty” and “The King’s Speech”), cinematographer Tami Reiker (who would become just the second woman ever nominated in the category), and composer Terrence Blanchard (who is also in the race this year for “Da 5 Bloods”) should not be counted out.