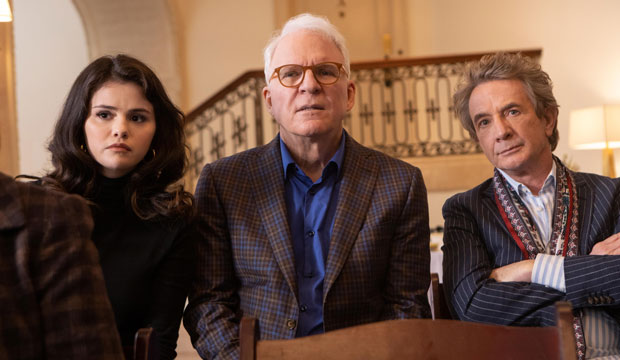 Hulu premiered the first three episodes of its new comedy series “Only Murders in the Building” on August 31, with additional episodes premiering every Tuesday through October 19 when its 10-episode season concludes. It’s a true-crime parody led (and co-created) by Steve Martin, who plays an amateur sleuth alongside Martin Short and Selena Gomez. But what do critics think of this show with its starry cast?

As of this writing “Only Murders” has a strong score of 75 on MetaCritic based on 25 reviews counted thus far: 23 positive, two somewhat mixed, but none outright negative. Over on Rotten Tomatoes, which doesn’t measure any reviews as mixed but simply as positive or negative, the show is rated 100% fresh based on 33 reviews. Those scores suggest that there’s a lot to like in this show, and some to love. The RT critics’ consensus summarizes the reviews by saying, “‘Only Murders in the Building’s’ silly approach to true crime obsessives is at once hilarious and insightful, thanks in large part to its extremely charming central trio.”

Critics are saying the show’s setup is “elegantly, addictively simple,” with Martin, Short, and Gomez playing a trio of true-crime podcast obsessives who try to get to the bottom of a death in their building. It’s “sly, boisterous, and a bit melancholy” with “above-average laughs” and “a clever mystery.” Though others argue the show lacks a “sharp bite” and is “more silly than funny,” perhaps needing to be “a little less kooky and a little more thinky.”

Martin co-created the show with John Hoffman, who was previously a producer and writer for HBO’s “Looking” and Netflix’s “Grace and Frankie“; he’s also a past Emmy nominee as a writer for the 2009 Oscars telecast. Martin is an Emmy winner for variety writing, though his trophy came more than 50 years ago for his work on “The Smothers Brothers Comedy Hour.”

Martin and his “Only Murders” co-star Short more recently appeared in a variety special together, 2018’s “Steve Martin and Martin Short: An Evening You Will Forget for the Rest of Your Life.” Short has two Emmys on his mantel (for “SCTV” and “AFI Life Achievement Award: A Tribute to Mel Brooks”), though you’d think with their statures in the industry they would have more than three Emmys between them. Maybe more will come for “Only Murders,” which will be eligible for the awards in 2013. Check out some of the reviews below, and join the discussion on this and more with your fellow TV fans here in our forums.

Alan Sepinwall (Rolling Stone): “The premise of ‘Only Murders’ is elegantly, addictively simple. If creators Steve Martin and John Hoffman were content just to play it for laughs, making fun of true-crime podcasts and the people who obsess over them, it would already be one of this year’s greatest TV delights … But the series soon turns out to be — like ‘The Princess Bride,’ ‘Galaxy Quest,’ or ‘Jane the Virgin’ — that rare and wonderful thing: the parody that also offers a great example of the genuine article.”

Danette Chavez (The A.V. Club): “Sly, boisterous, and a bit melancholy, Hulu’s ‘Only Murders In The Building’ would be a great pick-me-up even if we weren’t in the doldrums of late summer. The dramedy, from creators Steve Martin, John Hoffman, and Dan Fogelman, glides out of the gate, introducing characters and conflict with great elan and efficiency … If you find personal revelations as thrilling as the resolution of a crime, it could even become your next TV obsession.”

Kristen Baldwin (Entertainment Weekly): “The 10-episode series, co-created by Steve Martin and Jonathan Hoffman, is a solid, star-filled comic mystery that’s at its best when it chooses character over broad comedy … ‘Only Murders’ delivers above-average laughs, a clever mystery, and a starry cast. But it’s hard to shake the feeling that the show missed an opportunity to be something special, if only Martin and Hoffman had allowed it to be a little less kooky and a little more thinky.”

Chris Vognar (San Francisco Chronicle): “‘Only Murders in the Building’ is cute in its amateur-sleuth, odd-trio formulation. These three know how to stick their noses where they don’t belong, which is good for some cringe comedy … ‘Only Murders in the Building’ doesn’t have a particularly sharp bite. It’s more silly than funny. But it takes the time to build its character pers, and to place their obsession in a cultural context.”