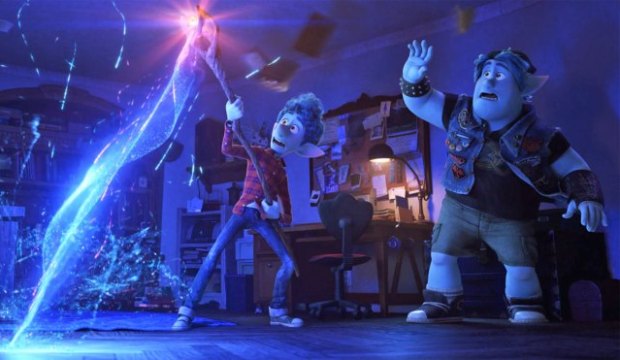 Pixar released two films last year, “Soul” and “Onward.” Funnily enough, the two are a bit like the brothers from the latter film, if “Soul” is the overachiever and “Onward” is the underappreciated underdog. According to our odds, both films will likely get nominated in the Best Animated Film category, but “Soul” has consistently ranked higher than “Onward.” However, the fantasy adventure has something that “Soul” doesn’t have: a Grammy-nominated song to compete in the Best Song category.

SEE All 22 Pixar films ranked from worst to best

“Onward” follows two mismatched brothers in a modern fantasy kingdom as they embark on a quest to reunite with their dead father. Its submitted song is Brandi Carlile’s “Carried Me With You,” a country ballad that mirrors the story’s theme of brotherly love and support. The film delivers a classic Pixar emotional gut punch in its climax, and the song, which plays over the closing credits, only helps to hammer that home.

The five-time Grammy award winner wrote the song along with her frequent collaborators, Phil Hanseroth and Tim Hanseroth, with whom she shares two of her Grammy victories. The trio could easily win their third Grammy together for “Carried Me With You,” which is nominated in the Best Song Written for Visual Media category this year.

It would be easier to list the songs from Pixar films that didn’t win an Oscar or a Grammy than those that did – the animation studio has racked up eight Oscar nominations in the Best Song category with three wins, and the original songs from its films have gotten eight Grammy nominations, with four wins. The majority of these have gone to veteran songwriter Randy Newman, who has made a career of writing songs for Pixar films, beginning with their first feature, “Toy Story.” Only one film has had a song win both an Oscar and a Grammy: “Monster’s Inc.,” with Newman’s “If I Didn’t Have You.”

Newman received the studio’s second Oscar in the song category for “We Belong Together” from “Toy Story 3;” the songwriting duo of Robert Lopez and Kristen Anderson-Lopez won a third time for “Remember Me” from “Coco.” The three other films with Grammy-winning songs are “Wall-E” (Thomas Newman and Peter Gabriel for “Down to Earth”), “Cars” (Randy Newman for “Our Town”) and “Toy Story 2” (Randy Newman for “When She Loved Me”).

Best Song is an interesting category to predict, as the complex Academy rules can often prevent many titles from competing. The Pixar film’s likely competition is an eclectic bunch, including entries from “Tenet,” “Trolls: World Tour” and “Borat: Subsequent Moviefilm.” The songs that Carlile’s country hit faces at the Grammys are a more traditional group, including an original song from the “Cats” film adaptation, the title song for the as-yet unreleased new Bond film, “No Time To Die,” and the latest showstopper from “Frozen 2.” However, looking at its pedigree, it’s very possible that within the next few months “Carried Me With You” will have an Oscar or a Grammy … or even both.