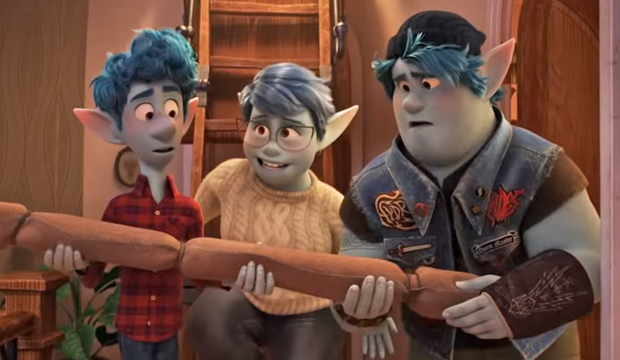 In 2001, the first Oscar for Best Animated Feature Film went to Dreamworks’ “Shrek.” That fairy tale bending film was about a green ogre who went on a journey to find a princess. Nineteen years later, Pixar’s “Onward,” directed by Dan Scanlon, hopes to be another fantasy adventure to get nominated and find magic at the Oscars.

“Onward” is not about a green ogre, but two blue elven brothers who go on a quest to reconnect with their deceased father. It not only touches on the fantasy elements of “Shrek,” but the profound themes of loss and family that other Oscar winners like “Big Hero 6” (2014) and “Coco” (2017) explore.

Here are the things to look for on “Onward’s” quest for Oscar recognition:

1. The quagmire of critics
“Onward” has earned critical raves, with Empire declaring, “in every way, it’s pure, perfect Pixar — a film with such warmth, whip-smart humor and creative energy;” and the AP said it was “a weird but worthy Pixar magic act.” To land a nomination in the Animated Feature category, a film usually needs to be well received by the critics. The average Rotten Tomatoes score of films nominated the past three years is 88.4%. “Onward” has an 88% score on RT. Its Metacritic score of 61% does fall below the equivalent average of 73.3%. However, it is far from an outlier, outperforming the 2017 nominees of “Boss Baby” (50) and “Ferdinand” (58).

2. The perils of precursors
Like stone ravens the earlier awards can be helpful markers pointing to the Oscars. In the last three years, 13 of the 15 Golden Globes nominees for Animated Film have gone on to Oscar nominations. At the Annie Awards in the same years, 10 of the last 15 feature nominees have converted to an Oscar nod. Due to a delayed awards season, we are yet to see how “Onward” will do with the precursors.

3. The variable voters
It is worth remembering that Oscar voters can be their own beast. Critical acclaimed features have been snubbed. In 2014 “The Lego Movie” famously failed to get an Oscar nomination with a 96% RT score and 83% on Metacritic. And precursors do not convert to Oscar noms 100% of the time. Last year we saw the Golden Globes (“Missing Link”), Annies (“Klaus”) and Oscars (“Toy Story 4”) all awarded different films. More important than anything else, “Onward” needs to strike a chord with the Oscar voters. For its makers, hopefully the film’s whimsy, adventure and heart will do just that.