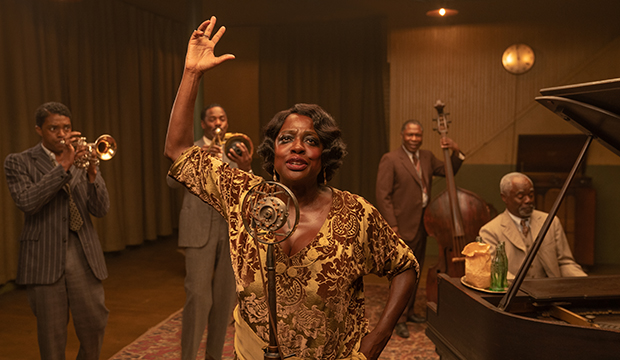 Mia Neal, the hair-department head on “Ma Rainey’s Black Bottom,’ had to make hundreds of wigs for this Netflix drama based on August Wilson’s 1982 play. As she recalled in a recent conversation with the film’s other hair and make-up artists, Ma Rainey’s horsehair wig was the most challenging (but worth the effort as the team just made the Oscars shortlist).

Ma Rainey, the legendary blues singer played by Viola Davis in the film set in the late 1920s during a particularly contentious recording session in Chicago, wore two wigs. “I used to call one her show wig, which is the wig she performs in and that’s the one made of the horsehair,” she said.  “And then the second one is the more finger wave wig she wears as her everyday wig.”

It was costume designer Ann Roth who discovered in her research that Ma quite literally wore a ponytail.“The first fitting we had with Viola in New York,” she said, ‘You have to do the horsehair.” The film’s director George C. Wolfe, also at the fitting, agreed horsehair was necessary. “So, I ordered some horsehair from Europe,” she explained. “It came in and apparently they just kind of tie it and cut it off of the horse in its raw state.”

Meaning that the hair was caked in manure and lice eggs. Needless to say, “it was pretty jarring. Also, clearly the thing had been stored away for years, so everything was sort of caked on there. You had to peel the hairs apart. Horsehair is nothing like human hair, which I didn’t know. It’s more like a wire brush. I could only separate small pieces at a time, otherwise I would lose control of the horsehair.”

After she separated the hair, she boiled it because Neal knew that “I can’t put a wig with horse manure and eggs on Viola Davis. Through the boiling process I realized that the hair actually softens when you boil it. So, I used the same method when I rolled the wig and set it. I submerged in boiling water to soften it and hopefully hold the set.”

Neal and Roth met during pre-production to discuss the look for Ma Rainey. “There are so many details about her that are missing building the character is important,” she said. Thankfully, Neal had access to a lot of Harlem Renaissance photographs. “As far as Ma’s character goes, a lot of it has to come from the psychological background,” said Neal. “This is a woman who is first generation free in this country of her family. So, you have to factor that in. She changed her name. She was from the deep South during hard labor times. So, this is the woman who recreated herself.”

Also involved in those early meetings with Neal and Roth was Davis’ make-up artist Sergio Lopez-Rivera who put in a lot of sweat equity in his makeup design for the singer known for being the “ugliest woman in show business.” “Like Mia says without psychology you cannot understand character and therefore you can’t do their hair or makeup, or you can’t get them dressed,” he said.  “So, you have to be able to understand the psychology of the person and the associated economic status of each person. What was the world they lived in? What did she have access to?”

PREDICT the Oscars nominations; change them until March 15

In the 1920s, he noted, women of color didn’t have a lot of access to makeup. “She had to make do and that was what she was used to do because she was constantly on the road,” he said. Because the film takes place in the humidity-ladened Chicago summer, “sweat was going to be almost like another character in the movie,” said Lopez-Rivera. “I was doing makeup allied with finders that would closely resemble something like Bette Davis’ ‘What Ever Happened to Baby Jane?’ which was actually the reference Viola used to give me.” And Ma’s perspiration was part of the story. “The sweat is kind of informing the struggle, “informing the discomfort in the room of what might be a stressful situation.”

“Ma Rainey” marks the final film appearance of Chadwick Boseman, who died of cancer last August at the age of 43. He electrifies as Levee, a fast-talking, ambitious horn player in Ma’s band.  Boseman has received numerous critics honors and just as Davis, is currently nominated for a Golden Globe, SAG and Critics Choice awards. He is considered a front-runner for the Best Actor Oscar. His make-up artist Sian Richards and hairstylist Deidre Dixon also were inspired for his sleek appearance by the Harlem Renaissance photographs. “We wanted some flyness because Levee is fly,” said Dixon. “He was ambitious. He was kind of dark and edgy, so we kind of wanted to have that.”

Along with flare. “When it came to his look, Chad was actually very particularly,” said Dixon. “He wanted to be polished but still wanted to have a little oomph. So, we discussed those looks and the makeup as far as his mustache” Richards noted that they wanted to make Boseman look completely than in his roles in 2013’s “42” and 2018’s “Black Panther.” “One of the things we wanted to do as make him look younger,” said Richards. “It was really important to us. It was like to make him look like a diamond that’s nearly polished…. Even with his mustache, nothing was a sharp cut. I literally scissor trimmed it, so it was an imperfect perfect.”

The sweat level was also important to Boseman’s hair and makeup design. “I kept him always with a glow,” said Richards, adding that she used hemp oil “because I don’t put chemicals on people, so it gives them a beautiful glaze. He always looked like he had a shine to him.” But when Levee explodes in anger, said Richards “his sweat exploded with him and that had a direct impact, of course, on Deidre’s hairstyle because that man when he let it go it was like a rainfall.” Dixon pointed out heat and perspiration makes natural hair swell. ‘I was like ‘oh my god, please don’t sweat. Please don’t sweat. Oh God, he’s sweating. Here comes the fro. It’s coming.’”