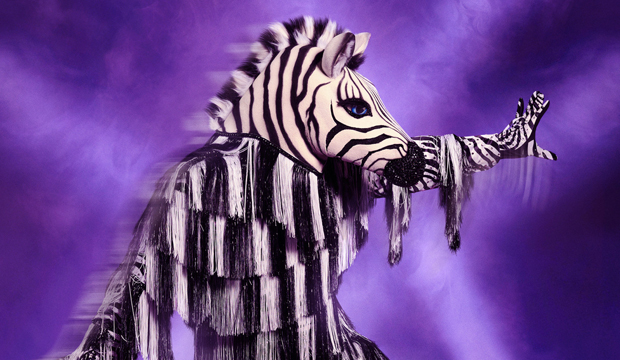 Despite having the heart of a champion the Zebra couldn’t keep up with his fellow semifinalists on Wednesday’s episode of “The Masked Dancer.” The fiery hoofer that we loved watching torch the stage was eliminated in fourth place and revealed to be boxing legend and two-time Olympic Gold medalist Oscar De La Hoya. After shimmying his tassels in a Las Vegas-inspired number to “Mack the Knife” by Bobby Darrin, the “Golden Boy” was cut from the competition just short of next week’s Season 1 finale.

“It was probably the best experience I’ve ever had,” Oscar admitted during his unmasked interview with host Craig Robinson. When asked how it compared to competing in the ring, the athlete showed off his signature footwork before responding, “I think being the Zebra is a lot tougher!” In a more serious moment, Oscar revealed that he dedicated the night’s performance to his mother, Cecilia, who passed away from breast cancer right before the Olympics, “So that gold medal is for her.”

Helping Brian and Will correctly guess Oscar as the Zebra were some very helpful hints in his clue packages. The bag labeled $19.92 in Zebra’s package was a nod to Oscar’s taking home the gold at the 1992 Olympics. The clapperboard with Oscar winners in Zebra’s package was a clue to his name: Oscar. He also gave us insight on that graham cracker with an “E” on it, reminding us he was nominated for a Grammy Award for his self-titled debut album in the Best Latin Pop Album category in 2000.

Oscar was the seventh dancer to be unmasked this season, preceded by Ice-T as the Disco Ball, Bill Nye as the Ice Cube, Elizabeth Smart as the Moth, Brian McKnight as the Cricket, Vinny Guadagnino as the Hammerhead and Jordin Sparks as the Exotic Bird. The three remaining hop-steppers still in contention for the Diamond Mask trophy are Cotton Candy, Sloth and Tulip. Did you guess Oscar De La Hoya was dancing behind the Zebra mask?