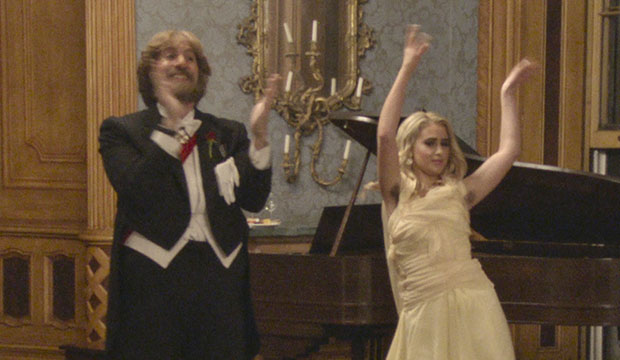 Sing out their names: Sacha Baron Cohen, Peter Baynham, Jena Friedman, Anthony Hines, Lee Kern, Dan Mazer, Erica Rivinoja, Dan Swimer and Nina Pedrad. These are the record nine writers who have been nominated for Best Adapted Screenplay for their contributions to “Borat Subsequent Moviefilm,” the same team that won the Writers Guild Award for Adapted Screenplay several weeks ago.

As impressive as that WGA win was, it comes with a slight caveat for Oscar prognosticators. Yes, “Borat’s” WGA victory was over two of its Oscar rivals in this category — Kemp Powers for adapting his stage play “One Night in Miami,” and Ramin Bahrani for adapting the novel “The White Tiger.” But two other huge competitors — Chloè Zhao for her adaptation of the non-fiction book “Nomadland,” and Christopher Hampton and Florian Zeller for adapting Zeller’s play “The Father” — were not eligible for the WGA prize but will return for a down-to-the-wire race for the Oscar.

Anxious to get a “Borat” sequel to moviegoers before the 2020 presidential election, Baron Cohen and his team of writers hammered out a new story in which the disgraced journalist Borat (Baron Cohen) is rescued from a gulag and ordered by the Kazakhstani premier to return to America. It seems that the premier wants to impress Donald Trump with a gift, which he asks Borat to present to “America’s Ladies’ Man” Mike Pence. The gift in question, however, turns out to be Borat’s 15 year-old daughter Tutar (Oscar nominee Maria Bakalova), and along the way, father and daughter encounter a disparate group of Americans, including an unwitting babysitter, a pair of QAnon disciples and, of course, Rudy Giuliani.

For the film to work structurally, the script had to be locked down before filming so that Baron Cohen and Bakalova, when faced with the unexpected, could react naturally while making sure that they keep the story on track, an enormous challenge for both writers and actors. Because of the loosey-goosey tone feeling created by the film many moviegoers mistakenly believe that the entire film was improvised, but as the award from the Writers Guild can attest, the script was anything but.

Adapted Screenplay is shaping up to be a very tight race this year, although Baron Cohen, Baynham, Hines and Mazer are familiar with the category, having been previously nominated for the original “Borat.” (Baron Cohen is a double nominee for his supporting turn in Aaron Sorkin‘s “The Trial of the Chicago 7.”)

“Borat” might seem at first glance not the kind of script that movie historians might associate with Oscar. But with two key nominations by acting and writing, getting those two branches behind you might be all that you need to win.