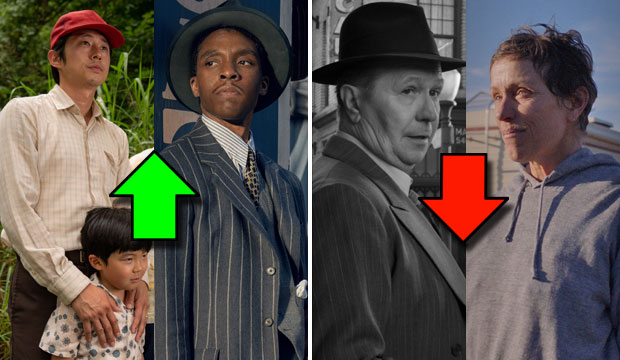 The 2021 Screen Actors Guild Awards nominations were announced on Thursday morning, and they were a good sign of things to come in the Oscar race for several contenders since these awards are voted on by industry peers, just like the Oscars are. Though for a couple of other films things are looking somewhat dicey. Read on to see who I think is trending up, who’s trending down, and who’s holding steady. And check out the complete list of SAG nominations here.

SEE‘The Crown’ and ‘Schitt’s Creek’ dominate 2021 SAG nominations, as everyone knew they would

“Da 5 Bloods” — I was getting nervous after its total shutout at the Golden Globes, but those voters don’t overlap at all with Oscar voters, so it wasn’t necessarily a fatal blow. Now the film’s SAG windfall (three noms including one for its ensemble cast) is a welcome boost to its momentum. One caveat, though: Delroy Lindo‘s snub in the lead-acting race is concerning for the film’s overall success since he’s the centerpiece of the story.

“Ma Rainey’s Black Bottom” — It missed out in the top category at the Globes, but the SAG Awards made it up to the film, giving it an ensemble bid along with individual noms for Chadwick Boseman and Viola Davis. It would have been a major setback if such an acting showcase had been left out by the industry’s actors.

“Minari” — This small-scale, independent, mostly Korean-language indie drama was a question mark at these awards: was its profile high enough to reach the SAG nominating committee? It turns out the answer was yes. Not only was it nominated for Steven Yeun and Yuh-Jung Youn‘s performances, its whole cast also got a citation, tying it as the most nominated film of the year.

“One Night in Miami” — Regina King‘s film was left off the Globes list for Best Picture, but it rebounded here with nominations for its cast and for Leslie Odom Jr. Its stock would be rising even higher if it got an additional acting nom for Kingsley Ben-Adir, but this nevertheless reasserts the film as a force to be reckoned with.

“Mank” — No top Oscar contender had a tougher morning than this Netflix docudrama, which soared at the Golden Globes with six bids but only managed a single acting nom for Gary Oldman here. Presumed Oscar front-runner Amanda Seyfried was left out of the supporting race, and the ensemble cast wasn’t nominated either. That puts this film on shaky ground.

“Nomadland” — Like “Mank,” this film only received one nomination (for Frances McDormand‘s lead performance), but unlike with “Mank,” most of us weren’t predicting it anywhere else. With a number of nonprofessional actors in the cast and overwhelming narrative focus on McDormand’s character, it’s hard to consider it a “snub,” per se. Still, only three films have ever won the Best Picture Oscar without at least a nomination for best ensemble at SAG (“Braveheart,” “The Shape of Water” and “Green Book”), so a nomination for “Nomadland” would’ve helped secure its position as the Oscar front-runner.

SEE2021 SAG Award Film Nominations: Which Studios, Streamers and Movies Got The Most?

“The Father” — It was nominated for its cast, but the film is overwhelmingly driven by the performances of Anthony Hopkins and Olivia Colman, both of whom were nominated. What’s more, the aforementioned snub of Seyfried at these awards might open the door for Colman to collect her second Oscar in three years.

“Promising Young Woman” — Carey Mulligan was nominated, but the film’s cast was not. So it was kind of a split decision for this revenge thriller. But since the film is driven so much by Mulligan’s performance and writer-director Emerald Fennell‘s storytelling (which wasn’t up for consideration at these exclusively actor-focused kudos), this result doesn’t strike me as much of a speed bump for it.

“The Trial of the Chicago 7” — Steady as she goes. It didn’t over-perform in the SAG nominations, and it didn’t under-perform. It got the crucial nom for its cast, and Sacha Baron Cohen made the cut for his supporting role. It might have gotten a boost if SAG had nominated another actor from the film like Mark Rylance, Yahya Abdul-Mateen II or Eddie Redmayne. But it made up for that by getting a nomination for its stunt team, which is especially impressive alongside full-blown action movies “Mulan” and “Wonder Woman” 1984.