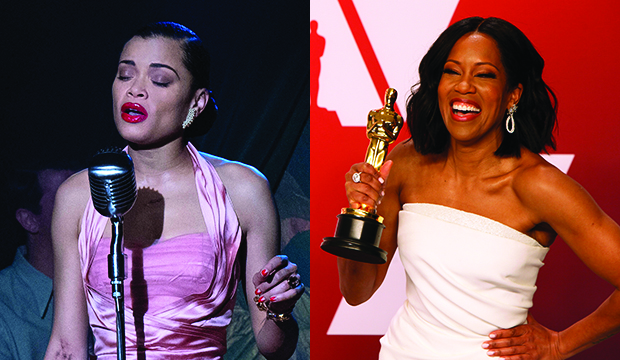 Regina King did not turn out to be the next Sylvester Stallone, but Andra Day could be the next Regina King. With a Golden Globe upset win under her belt for Best Drama Actress, the “United States vs. Billie Holiday” star now finds herself on the same Oscar path as King and Stallone were for “If Beale Street Could Talk” (2018) and “Creed” (2015), respectively. All three won Globes, but were snubbed by the Screen Actors Guild Awards and BAFTA (Day didn’t make the BAFTA longlist). King and Stallone also won Critics Choice, where Day is nominated and could very well win on Sunday, even if it’s one of their patented ties. While Stallone came up short for the Oscar, King went all the way, something that could very much happen for Day.

There are quite a few differences between all three races. Stallone and King were in supporting and were the frontrunners of their categories for the majority of their seasons — Stallone was operating off of lots of “Rocky” (1976) nostalgia in arguably his best performance of his career; King, building off of decades of goodwill. Stallone was ultimately knocked out at the Oscars by BAFTA champ Mark Rylance (“Bridge of Spies”), who was also the only consistent nominee in the supporting actor throughout the season.

King’s race almost mimicked Stallone’s exactly. The SAG and BAFTA went to different people both years, and both champs at the former — Idris Elba (“Beasts of No Nation”) and Emily Blunt (“A Quiet Place”) — were Oscar-snubbed. Plus, in King’s absence, the BAFTA went to Rachel Weisz (“The Favourite”), who, like Rylance, is a Brit. King managed to overcome all that at the Oscars because her season-long momentum was just too strong. She dominated the critics’ awards, was in the midst of an industry lovefest during which she won three Emmys in four years (she’s now won four Emmys in six years), is a beloved veteran, and her film was acclaimed, even if it didn’t make Best Picture (it likely missed in ninth place).

Day doesn’t have most of the advantages King did. “Billie Holiday” is her live-action film debut, so she doesn’t have years of experience and goodwill, but she’s also not a complete newbie since she’s a Grammy-nominated singer and has performed at the Oscars. Reviews for her film are, uh, mixed, but even the most ardent “Billie Holiday” detractor would agree that Day carries the film on her back with her tremendous performance (Hillary Clinton‘s a fan). “Billie Holiday’s” late release — complicated by the move from Paramount to Hulu, which likely made screener visibility a factor in her SAG and BAFTA snubs — meant Day missed the critics’ awards and couldn’t start building momentum. Until now.

Her Globe upset — Day was in fifth place in the combined odds behind the other predicted Oscar nominees, Carey Mulligan (“Promising Young Woman”), Viola Davis (“Ma Rainey’s Black Bottom”), Frances McDormand (“Nomadland”) and Vanessa Kirby (“Pieces of a Woman”) — will make the film a must-watch screener just as Oscar voting starts on Friday. Regardless of whether she wins at Critics Choice, Day’s path to Oscar is open as none of the top three — Mulligan, Davis or McDormand — has pulled ahead yet, and she would get another huge boost if SAG and BAFTA, like in King’s (and Stallone’s) year, go to different people so there is no consensus alternative.

At SAG, Davis is a safe pick since she is a five-time champ. But the best case scenario for Day would be if it went to someone who is not nominated at the Oscars, which would probably be Amy Adams (“Hillbilly Elegy”), who is in eighth in the Oscar odds. With Day MIA, SAG voters won’t feel the need to rubber-stamp the Globe winner since, you know, they can’t — and with the SAG Awards are five weeks later, the Globes might be a distant memory anyway — so they could do also do their own thing like they did with Blunt and Elba, the latter of whom also prevailed in the wake of #OscarsSoWhite. In King’s year, SAG was expected to go to none other than Adams, for “Vice,” the presumptive No. 2 in the race, but SAG voters just went for the performance they liked the most, Oscar race be damned.

At BAFTA, you can make a case for Mulligan. The Brit has won BAFTA in the absence of a Best Actress contender before — 11 years ago for “An Education” when eventual Oscar champ Sandra Bullock was ineligible for “The Blind Side.” And you cannot count out McDormand at either awards show. Yes, she swept just three years ago for “Three Billboards Outside Ebbing, Missouri,” but she headlines the Best Picture frontrunner and has quietly collected a slew of critics’ awards — six more than Mulligan has and 10 times as many as Davis has as of this writing.

If it ends up being a fractured race, Day may have the advantage with the baitiest role of them all. She’d, of course, be the second Black Best Actress winner after Halle Berry (2001’s “Monster’s Ball”), who, ironically, was the last Best Actress champ without a Globe win. And Day could do it all in front of King, who could be there (virtually) with a Best Director bid for “One Night in Miami.”