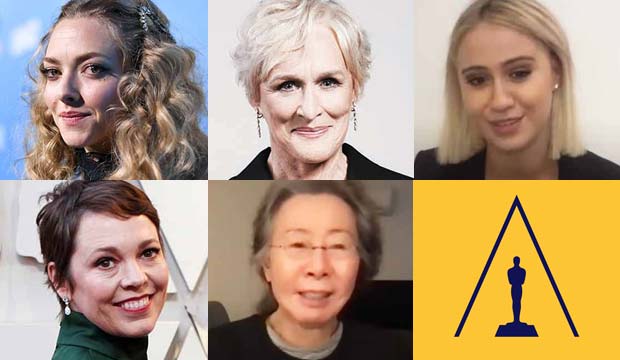 Best Supporting Actress was the most wild of this year’s Oscar acting races in Phase 1, and though the nominations turned out to be predictable — the five were our top five — the question of who will win remains unpredictable and might stay that way until April 25. While the male categories seem locked and loaded and Carey Mulligan (“Promising Young Woman”) has a healthy lead in Best Actress, there is no such consensus in supporting actress. Each nominee has at least one Expert predicting her to win, which you cannot say about the other three categories. The prospect of the Screen Actors Guild Award and BAFTA going to different people is very much on the table, setting us up for a Marcia Gay Harden-esque grand finale. So where do we stand now post-nominations?

Yuh-Jung Youn (“Minari”)
Youn is currently in first place, backed by seven Experts and seven editors for the win. The critical favorite, she has yet to win a televised precursor as she was snubbed at the Globes — but Jodie Foster‘s upset helped her more than anything — and lost the Critics Choice Award to Maria Bakalova (“Borat Subsequent Moviefilm”). That can all change at the SAG Awards, where “Minari” over-performed with three bids, so she could be a two-time champ should she prevail in supporting and the cast in ensemble. The Korean legend is also nominated at BAFTA, one of two supporting actress Oscar nominees with that corresponding bid. There is a lot of love for “Minari” and it maxed out in nominations at six, give or take one for Alan Kim, and conventional wisdom/spread-the-wealth logic says that Best Supporting Actress is the best/easiest place to award the film as there are overwhelmingly frontrunners in its other categories, Best Picture, Best Director, Best Actor, Best Original Screenplay and Best Original Score. But people don’t necessarily vote that way. And Youn has to overcome the academy’s Asian actors bias — she’d only be the second actress of Asian descent to win.

Maria Bakalova (“Borat Subsequent Moviefilm”)
Bakalova looked like she was in trouble after she lost the Best Comedy/Musical Actress Golden Globe to Rosamund Pike (“I Care a Lot”), but she rebounded nicely with a Critics Choice win and a BAFTA nomination before making the Oscar five. That makes her the only supporting actress contender to hit Globe, Critics Choice, SAG, BAFTA and Oscar (albeit it was in a different category at the Globes). She’s in second in the odds with two Experts and one editor picking her. There have been doubts about Bakalova all season long because of the type of movie she’s in and the type of performance she gives, so far afield from anything Oscar usually touches. But she’s defied expectations every step of the way, has the “breakout star” buzz and arguably the scene of the year, and “Borat” made PGA and snagged a Best Adapted Screenplay nomination, so she could very well take one if not both of the remaining precursors en route to Oscar.

Glenn Close (“Hillbilly Elegy”)
Speaking of defying expectations, Close ostensibly looked way down and out in the wake of the critical evisceration of “Hillbilly Elegy” in the fall. But if you ask me, she was always still in it, not just because of the unsettled race but because her transformational turn into cigarette-wielding, “Terminator”-loving Mamaw is appealing to actors and also because she’s Glenn Close, who has never won an Oscar. At one point (read: pre-“Hillbilly” reviews), she was in first place; she’s in third now with two Experts and one editor forecasting a little golden man at last on her eighth nomination. SAG is her final stand before Oscar and that’s always been her best shot at a precursor win since she has the most SAG-friendly performance and her peers also nominated her onscreen daughter Amy Adams. The Oscars aren’t always sentimental, but Close’s brutal loss two years ago for “The Wife” was recent enough that it’s still fresh on minds — compounded by the fact that she’s facing off yet again against the woman who beat her, Olivia Colman. You just can’t write this stuff. She does have one advantage this year that she didn’t two years ago: She’s not a lone nominee since “Hillbilly” is nominated for Best Makeup and Hairstyling and could win (it’s in second place).

Olivia Colman (“The Father”)
Earlier this month, we said that Colman is the safest for a supporting actress Oscar nomination but she probably won’t win. Nothing has really changed. Obviously she can win since, you know, she’s nominated, but this feels like one of those afterglow nominations for a recent champ. With one Expert and one editor predicting her, she’s in fourth place right now. The British contingent really came through for “The Father,” which has six bids, after it basically flopped at the top guilds, so if this race is fractured enough, you could theorize that the Brit bloc could pull this out for her. Like Close, Colman’s last stand is at SAG since the BAFTA jury overlooked her.

Amanda Seyfried (“Mank”)
The second Mean Girl to get an Oscar nomination (and in the same category), Seyfried survived a huge miss at SAG, where Gary Oldman made the cut. She was also snubbed by the BAFTA jury, so she has no precursors left before the Oscars. This was the situation Regina King was in three years ago for “If Beale Street Could Talk,” but King was the season-long frontrunner, critical darling and had won the Globe and Critics Choice Award. Seyfried, who has one Expert predicting her, doesn’t have any of that, and “Mank,” while the expected Oscar nomination leader, had some noteworthy snubs, like in Best Original Screenplay and Best Editing. Seyfried is oft cited as people’s favorite performance in the film, so she has that going for her, but right now you wouldn’t be wrong to peg this as a “nomination is the reward” bid.