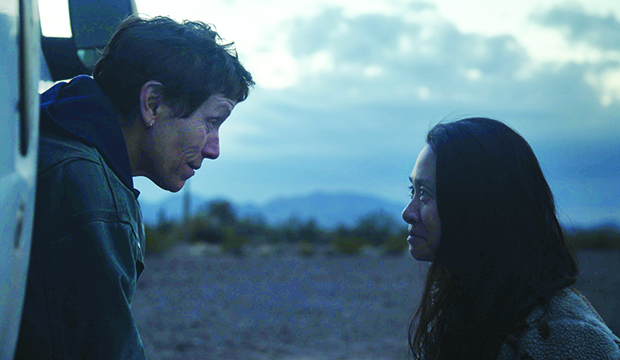 Chloe Zhao is well on her way to making Oscar history for her many contributions to “Nomadland,” having already done so at the nomination stage by becoming the first woman to earn four bids in a single year. The multi-hyphenate is nominated for Best Picture as a producer on “Nomadland,” Best Director, Best Adapted Screenplay and Best Film Editing. She is highly favored to win at least one of those categories, but could she pull off a historic sweep? Let’s rank the likelihood of Zhao winning each one.

After winning dozens of critics’ prizes for her sensitive direction, Zhao swept all four major precursors: Directors Guild of America Award, Golden Globe, BAFTA and Critics Choice. We’ve seen similar sweeps in recent years for directors like Damien Chazelle (“La La Land”), Guillermo del Toro (“The Shape of Water”) and Alfonso Cuarón (“Roma”), who all went on to win the Oscar. Sam Mendes (“1917”) was an exception last year, sweeping the precursors only to have Bong Joon Ho beat him at the Oscars (though they did tie at Critics Choice), but Zhao probably won’t have to worry about an upset when there isn’t even a clear alternative who could defeat her. Zhao would then make history as the first woman of color to win Best Director and only the second woman overall.

Best Picture has been a little more difficult to predict in recent years compared to past decades, but “Nomadland” has so thoroughly dominated award season that it is the overwhelming favorite to take the top prize. While Critics Choice, DGA and BAFTA were reasonable bets for “Nomadland” to win based on recent trends, the victories at the Golden Globes and Producer Guild of America Awards were much less certain, and a sign that, like Best Director, there simply isn’t another contender gaining the momentum to win. Of course, there’s always a possibility for an upset with the preferential ballot (just ask “La La Land,” which won all five of those exact precursors but lost Best Picture), but Screen Actors Guild Award ensemble winner “The Trial of the Chicago 7” has hardly shown the strength of “Moonlight.”

SEE After BAFTAs and DGA Awards, who’s up, who’s down in Oscar race for Best Picture?

Zhao’s script has been a default frontrunner in Best Adapted Screenplay for much of the season, but it is far from a guarantee. Subtle, poetic films like “Nomadland” simply don’t win screenplay categories very much, and if voters are already rewarding Zhao and her film in director and picture, they may go another way for adapted screenplay. “The Father’s” script won over “Nomadland’s” screenplay at BAFTA, which could be chalked up to hometown advantage but it could also be a telling sign, considering Oscar voters also loved that film enough to give it six nominations. Meanwhile, “Borat Subsequent Moviefilm” won at WGA, where “Nomadland” and “The Father” weren’t eligible. With heavier competition at the Oscars, Zhao is more vulnerable here, but she could also have the advantage of being in the Best Picture frontrunner to win this too.

Best Film Editing is by far Zhao’s weakest category, with all four of the other nominees having flashier editing that voters typically prefer to reward. Gold Derby odds show the fine-tuned “Sound of Metal” and the propulsive “The Trial of the Chicago 7” way ahead. Those films tied for the editing prize at the Critics Choice Awards while “Sound of Metal” won individually at BAFTA. Like with Best Adapted Screenplay, “Nomadland” still has a chance because of its top placement in the Best Picture race, but if there was one place that Oscar voters deny Zhao, it’s probably this one.