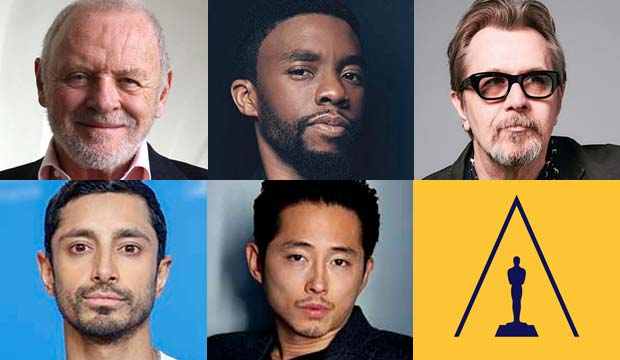 Welcome to Oscar Experts Typing, a weekly column in which Gold Derby editors and Experts Joyce Eng and Christopher Rosen discuss the Oscar race the same way you’ve been communicating with your coworkers for the past year: via Slack. This week, on pre-taped Screen Actors Guild Awards weekend, we take another look at Best Actor now that “The Father” is finally out for the world to see.

Christopher Rosen: Hello, Joyce! It’s the Friday before the Screen Actors Guild Awards… and also the Friday after the Screen Actors Guild Awards, since time is a construct and life is basically “Tenet” now. But since we already broke down our thoughts on this year’s pre-taped SAG Awards spectacular, why don’t we return to a race we both think is all over but the shouting? That would be Best Actor, where Chadwick Boseman is heavily favored to win the first posthumous acting Oscar since Heath Ledger. This is one of those runaway victories I can get behind: I really do think Boseman’s performance in “Ma Rainey’s Black Bottom” is the cream of the crop among this year’s Best Actor nominees and, to me, it seems likely we’d have the same result in this race had he not died last year. But because being an “Oscars expert” is nothing without a good deal of second-guessing, what if we’re all wrong? What if Boseman, about as locked-in a favorite as this year’s race has in any category, is vulnerable to voter complacency? Is there another actor who can step up to pull off what would have to be considered one of the biggest upsets in Oscars history?

Allow me to fire the first salvo in this contrarian conversation: Riz Ahmed. It’s arguable there is not a more universally accepted first-class actor working at the moment. Ahmed is the type of performer who elevates all material, from “Star Wars” to supporting a gonzo Jake Gyllenhaal and everything in between. He brought it to another level in “Sound of Metal,” playing a drummer grappling with sudden hearing loss and the effect that has on his self-identity. Ahmed’s work is singular, but I guess if I was striving for a prior Best Actor connection I would suggest a little bit of Nicolas Cage in “Leaving Las Vegas” mixed with some Eddie Redmayne in “The Theory of Everything,” but with the subtly of Casey Affleck in “Manchester by the Sea.” Which is to say, it’s a pretty powerful bit of acting. But that alone wouldn’t push him over the top against Boseman, who is equally strong. If I was going to predict a bonkers upset, it would be because “Sound of Metal” is a stronger movie than “Ma Rainey.” The academy was clearly infatuated with the Amazon Prime Video release: It landed nominations for Best Picture, Best Original Screenplay, Best Editing, Best Sound and Best Supporting Actor for Paul Raci in addition to the Ahmed nomination. It could easily walk away from the April 25 Oscars with two trophies (Best Editing and Best Sound) and based on how it performed, it feels like other nominations were likely in play (Best Director for Darius Marder, Best Supporting Actress for Olivia Cooke?). So, does the overall love for “Sound of Metal” push Ahmed over Boseman? Or do you want to make the case for another nominee in this category as a potential shock winner?

joyceeng: Yes, caught in between two SAGs. Time is indeed a flat circle, to quote a former Best Actor champ. As you well know, I would love it if Ahmed somehow were able to pull this off and be halfway to an EGOT. It’s such a complex, moving performance before you even give him “degree of difficulty” points for learning to drum and ASL. And “Sound of Metal” is a very well-liked — hell, I’d dare say beloved — little film that could, but I don’t really see him or anyone else toppling Boseman. I disagree that we’d get the same result if these sad circumstances were different — maybe we would’ve, but I think the race would’ve been far more competitive with (ideally) a few of them trading wins. This is overall a very strong category. Lemme throw in our initial frontrunner: For a long stretch, the one and only Sir Anthony Hopkins was way out front, but then he sorta became an afterthought, a guaranteed nominee who wasn’t gonna win. That’s partially due to “The Father” sitting on the shelf for so long and him not winning many critics’ awards, but now that the film’s out and on VOD, he’s gotten renewed buzz. You couldn’t really avoid all the Twitter raves and declarations about how he should win the Oscar last weekend, but before everyone gets carried away, the Film Twitter bubble is not the industry. Is he peaking at the right time or the wrong time because it’s too little, too late?

Christopher Rosen: My take on “The Father” is akin to the late great Jessica Walter on “Arrested Development”: “I don’t understand the question and I won’t respond to it.” Which is no fault of the film but rather the result of its Byzantine, pandemic-afflicted release. But even if that weren’t the case, I don’t think Hopkins would be a real contender, despite the quality of his work. He just feels like he’s at the Hanks level of taken for granted: a guy who already won and feels kind of, for lack of a better word, rote? When is he not great and worthy of an Oscar? That ding is also why I feel like Gary Oldman isn’t a serious factor in the race any longer. I’m in the tank for “Mank” but I feel like even the film’s detractors might have to admit he’s better there than in “Darkest Hour.” But because he already won, who cares? So that leaves Steven Yeun as the last contender here. He feels in league with Ahmed in that it seems likely he’ll win an Oscar in the next 10 years — perhaps for that secret Jordan Peele movie he’s doing with future Academy Award winner Daniel Kaluuya. But despite a great affection for Yeun, I’m not sure he has a chance here. Convince me I’m wrong?

joyceeng: As our pal Beverly Vance would say, “I always try,” but you know, I’m not sure I can do the mental gymnastics to justify a Yeun win, as deserved as it would be. Yes, he and Ahmed fit the same bill: two fan-favorite Internet Boyfriends in their late 30s (typically when Oscar starts to pay attention to men) who are primed for future gold and a lot more work. Staying booked and busy is a nice consolation prize. The general line of thinking is also that “Minari’s” best chance for a win is in supporting actress for Yuh-Jung Youn. I, too, found Oldman more interesting in “Mank” than “Darkest Hour,” but I feel like even Oldman knows he’s probably fifth here — he won three years ago, compared to 29 years ago for Hopkins. You can say Frances McDormand also won three years ago and she’s not out of it this year, but the dynamics of Best Actress and Best Actor are totally different and she headlines the Best Picture frontrunner. Oldman’s the classic post-win afterglow nominee who’s happy to be invited back, like Leo last year. The other thing is, there’s no single consensus alternative to Boseman. At first it felt like it was Hopkins, but Ahmed came on strong, so they’d probably vote-split themselves out of any upset. Some are hope-dicting a Hopkins upset at BAFTA, but the Brits will likely just keep the Boseman train chugging along, no?

SEE Oscar Experts Typing: Best Picture is still ‘Nomadland’s’ to lose, but who can beat it?

Christopher Rosen: Yes, I think so. As we wrap up our typing, allow me to go back to the long-forgotten Golden Globes to close out why Boseman will win. Before Simone Ledward Boseman’s emotional acceptance speech during that Zoom ceremony brought the few watching live to tears, the response from the four men who lost to Boseman said it all. Hopkins didn’t even show up; Ahmed and Oldman smiled with the knowledge that justice had been served; and Yeun wasn’t even nominated because the Globes were gonna Globes. It’s hard to imagine any of these nominees expect to defeat Boseman on Oscar night. Who are we to argue?

joyceeng: Look, let’s face it: They all know. And let’s not forget that Globes segment with TikTok star La’Ron quizzing kiddos on the Globes and all they knew (besides Captain America and Jane Fonda being a person who walks normally) was that Chadwick Boseman is Black Panther. However, Hopkins doesn’t show up to these things anyway — he ditched everything last year for “The Two Popes” — so his absence this time around isn’t unique. He’s just living his best life in Malibu with his cat, piano, paintings, fragrance line, and making TikToks. Let’s give him an Oscar for that.